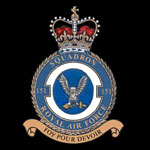 'All-black Hurricane I V6931 / DZ-D of No 151 Sqn wears the New Zealand fern leaf decoration chosen by its regular pilot, Kiwi Flt Lt I.S. 'Blackie' Smith. The ace made his first night claim - and his last flying the Hurricane - in this aircraft during the Blitz on 10/11 May 1941, when he was credited with an He 111, probably destroyed.' ... ...'Blackie' Smith was a flight commander with No 151 Sqn when it switched to nightfighting. He flew this aircraft for the first half of 1941, and probably used it to destroy an He 111 over London on the night of 10/11 May 1941. A Kiwi, Smith decorated the nose of the fighter with a New Zealand fern leaf. This aircraft was also flown by several of the squadron's other notable pilots, including Sgt Alan Wagner.'

A flight of Hawker Hurricane Mark Is of No. 151 Squadron RAF take off from North Weald, Essex, while beneath them, Hurricanes of 56 Squadron RAF taxy to the northern end of the main runway. Behind them can be seen the wireless masts of the GPO radio station at Weald Gullet.