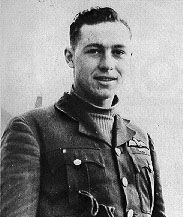 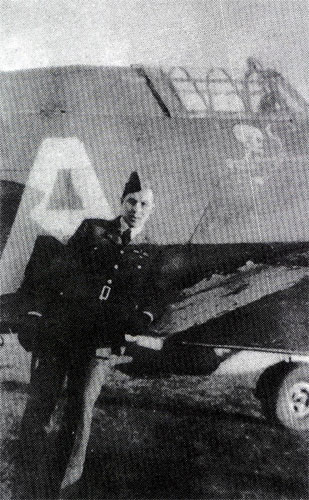 William 'Willy' Lidstone McKnight was born in Edmonton, Alberta, Canada on 18 November 1918 and moved with his family to Calgary in 1919. He was educated at Crescent Heights High School in Calgary and after graduating, enrolled in medical school at the University of Alberta in 1938. Deciding on a flying instead of a medical career, he left his native Canada for England in January 1939 to join the Royal Air Force on a short service commission. After completing his flying training, he joined the newly reformed 242 (Fighter) Squadron at Church Fenton on 6 November 1939, a squadron composed almost entirely of Canadian personnel.

With his flight commander and fellow Canadians Slim Grassick and Stan Turner, McKnight went to France on 14 May 1940 on attachment to 607Sqn. A few days later they were attached to 615Sqn at Moorselle, Belgium and on the 19th McKnight claimed his first victory, a Bf109 destroyed over Cambrai, becoming the second Canadian to down a Luftwaffe aircraft in World War 2. Two days later, he returned to England. Flying over Dunkirk on 28 May, he claimed a Bf109 destroyed but was himself attacked by another Bf109 which damaged his Hurricane's oil system. On 29 May, McKnight claimed one Bf109 and a Do17 destroyed with a further Bf109 claimed as a probable and that evening, was awarded an immediate DFC, making him the first Canadian fighter pilot to be decorated in World War 2. On 31 May he destroyed two Bf110s and on 1 June, claimed two Ju87s destroyed and two probables.

On 30 August he claimed three Bf110s and one He111 destroyed and on 9 September two Bf110s. He destroyed a Do17 on 18 September and shared in the destruction of a Ju88. He was awarded a Bar to his DFC on 8 October and on 5 November he claimed his final victory, a shared Bf109 over Gravesend.

On 2 January 1941, McKnight, in company with P/O M.K. Brown, was on an offensive cross-Channel operation. After crossing the French coast near Gravelines, they were strafing enemy troops when they were bounced by Bf109s. Although Brown managed to get in a quick burst of fire at a Bf109 going after his leader, both aircraft disappeared into cloud and McKnight was never seen again. He is believed to have fallen to either the flak or the Bf109s.

At the time of his death, Willy McKnight was the highest scoring Canadian pilot. His name is entered on the Air Forces memorial at Runnymede and he is remembered on a commemorative plaque displayed at Calgary International Airport; a section of the main road which passes Calgary airport also bears his name.

Photo 01: The skeleton with sickle personal emblem which appeared on both sides of the fuselage on F/O McKnight's Hurricane 'LE-A' was a reference to his pre-war days as a medical student. Note that in each view, the skeleton is correctly portrayed with the sickle in it's the left hand.

William Lidstone "Willie" McKnight DFC & Bar of 242 Squadron was the second Canadian ace and that country's fifth-highest scoring ace of the Second World War. McKnight joined the RAF in early 1939 and served in No. 242 Squadron RAF during the final phase of the Battle of France, covering the Allied retreat from Brittany, and later the Battle of Britain. McKnight's aircraft wore a distinct cartoon of a jackboot kicking Hitler on the port side of the engine cowling. His Hurricane also carried a human skeleton image which held a sickle in its hand under the cockpit, on both sides of the aircraft.[1] McKnight scored 17 victories, as well as two shared and three unconfirmed kills. McKnight was shot down and killed on 12 January 1941 during a fighter sweep over Calais.[2]

William Lidstone "Willie" McKnight was born in Edmonton, Alberta, Canada on 18 November 1918 and grew up in Calgary. He was considered a bit of a character at school and showed a rebellious streak. At Crescent Heights High School, he quarterbacked the football team but was renowned for once crashing his father’s car into a neighbor's fence while trying to impress a new girlfriend.

In 1939, after entering the medical school at the University of Alberta, McKnight continued his cockiness but was on the verge of expulsion when a British recruiting mission for the Royal Air Force arrived in Calgary. Seeing a chance for adventure as well as leaving behind a turbulent romance with his girlfriend Marian, he enlisted as a prospective fighter pilot in February 1939 and sailed for England.

Commissioned in the Royal Air Force and appointed Acting Pilot Officer on Probation, RAF (41937), 15 April 1939, McKnight began training at No. 6 Flying Training School (FTS), Little Rissington, Bourton-on-the-Water, Cheltenham.[3] While in training, he was nearly incorrigible, being confined to his barracks twice (for a fortnight) and, along with a classmate, being placed on open arrest as "perpetrators of a riot."[3] Highjinks soon came to an end when Germany invaded Poland and the recruits in training were hurriedly graduated as fighter pilots.

P/O McKnight was posted to No 242 Squadron on 6 May 1940. The squadron had reformed on 30 October 1939 at RAF Church Fenton and initially had a large number of Canadian personnel on strength. The first aircraft assigned to the squadron were Blenheim MK 1F twin-engine fighters but replacement Hawker Hurricane fighters were sent in January 1940. After transitioning to the more potent Hurricane, the squadron becoming operational on 24 March 1940.

As part of the British Expeditionary Force (BEF), P/O McKnight and 242 Squadron began operations over France on 14 May, a detachment being based at French airfields. With the squadron partly stationed in England in reserve, four individual pilots (with six more following) were attached to other BEF units. McKnight flew with No. 615 Squadron at Abbeville, France, but the constant retreats necessitated three new relocations in six days. In typical McKnight style, he commandeered a limousine that had been abandoned by a "brass hat" and carried on a romantic encounter with a Parisienne (whom he eventually tried to smuggle back to England in a transport).

On 19 May 1940, McKnight scored his first victory while on an evening patrol over Cambrai. The four patrolling Hurricanes were "bounced" by two groups of Messerschmitt Bf 109s totaling 19 enemy fighters. Flying as the "tail-end Charlie," McKnight shouted a warning and wheeled into a steep climbing turn that brought him on the tail of one of the diving Bf 109s, which he shot down, his squadron's first kill over France.

On 21 May 242 Squadron pilots were withdrawn to Britain essentially to begin a seven days' leave which was abruptly cut short after 48 hours when was the retreating BEF and allied armies were pushed into Dunkirk. The squadron was rushed to RAF Manston and operated out of French airfields during daylight hours but returning in the evening. As fierce fighting over Dunkirk took place, McKnight claimed a victory over a Bf 109 on 28 May but his Hurricane was hit, and he had to limp home with his oil and coolant systems shot up. Over Dunkirk, in four days, McKnight shot down six enemy aircraft, eventually claiming 10 victories by 7 June 1940.[4]

The constant combat had been telling on McKnight and he was admitted to hospital in July 1940 to recuperate. He had lost 27 lb (12 kg) in weight and was clearly suffering from sleep deprivation as well as a host of other ailments including stomach problems. While in hospital, he openly fretted over a squadron mate, P/O Stan Turner overhauling him as the top scorer.

No. 242 Squadron was badly mauled over France, losing 11 pilots and was reassembled at Coltishall with a new commanding officer, Squadron Leader Douglas Bader. In 242, he saw a squadron that needed to be "whipped back into shape" and he proceeded to establish his brand, selecting new flight commanders, requisitioning new equipment and eventually winning the approval of every squadron member, especially "Willie" McKnight. Bader saw his top ace as a surrogate son and chose him as a wingman.[5]

By mid-July, 242 was declared operational again and joined No. 12 Group, Fighter Command. Throughout July and August although the Battle of Britain had raged over England, the industrial Midlands which the squadron patrolled did not receive heavy attacks. On 30 August 1940, the squadron relocated to RAF Duxford and was involved in action when a large formation of He 111s with Bf 109 and Bf 110 escorts was intercepted on a raid against RAF North Weald. Bader scored two victories while his "wingman" claimed two enemy Bf 110s and a He 111.

On 9 September, McKnight scored twice when enemy raiders were intercepted by a group of three squadrons that were coordinated into a single unit by Bader as part of his "Big Wing" plan. While trying to split the escorting fighters from the bombers, McKnight's Hurricane (bearing his irreverent individual marking of a death's head skull and skeleton with a sickle) was hit and one aileron was shot away. He barely made it back to his home base.

Another two kills took place on 18 September when McKnight brought down a Dornier Do 17 and shared in the destruction of a Junkers Ju 88. His final victory was over the Thames Estuary on 5 November 1940, McKnight disabled a Bf 109, pulling close and motioning for the enemy fighter pilot to lower his undercarriage in a sign of defeat. Instead the pilot (Fw Scheidt of Jagdgeschwader 26) bailed out over the Thames.

Promoted to Flying Officer, McKnight was awarded the DFC on 30 August 1940 and a Bar in September 1940.

No. 242 Squadron was relocated to Coltishall in November 1940, followed by a further move to Martlesham Heath in December. On 12 January 1941, the squadron began a series of offensive sorties against targets in France, first acting as escorts for Blenheim bombers then beginning on 12 January, the first of the "Rhubarbs," low-level intruder attacks on targets of opportunity.

While strafing an E-boat in the English Channel, P/O M.K. Brown accompanying McKnight, broke off as the duo were under fire from anti-aircraft fire from the French coast just as a Bf 109 attacked. Brown made it back home but McKnight was listed as 'missing'. Recent research suggests McKnight fell to Fw. Helmut Brügelmann of Jagdgeschwader 26 8./JG26 (three kills) who was himself KIFA 15 January, 1941 when he crashed his Bf 109E-4 WNr 3728 off St. Valery, France. WIA 31 May, 1940 when he was shot in the hand during aerial combat with a Hurricane. He bailed his Bf 109E-1, over the Channel and was captured, but released when Dunkirk was taken by the Germans. One known victory, his 1st, a Mureaux at Löwen/Wavre, 16 May, 1940. His 2nd, a Hurricane northeast of Dunkirk, 31 May, 1940. His 3rd, a Hurricane west of Boulogne, 12 January, 1941. Bader was distraught at the loss of McKnight and vowed revenge, but 242's "top gun" was never found. Fellow Canadian ace Pilot Officer John B. Latta (seven kills and one shared) was also killed on this day.[2]

Before his death in January 1941 he had 17 kills, two shared and three unconfirmed credited to his score. Following is a list of victories ;

Calgary's McKnight Boulevard is named after him.[6]