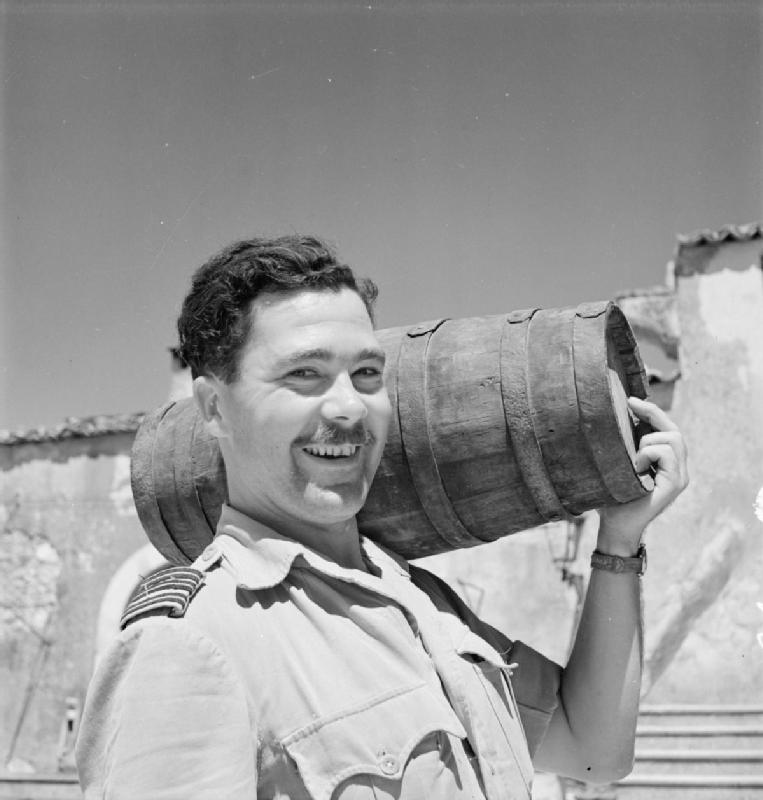 Photo George Westlake with a cask of wine, responsible for the success of Bowler

Group Captain George Westlake, who has died aged 87, was the leader of the brilliantly executed Operation Bowler, the bombing of shipping in the docks at Venice and the only authorised wartime air attack against the Italian city.

With the destruction of the rail and road network in northern Italy by early 1945, the Germans resorted to transporting desperately needed supplies by ship to Venice for onward distribution by canal and river craft. In March that year authority was given to attack the port of Venice - there were strict instructions that there must be no damage to the historic buildings and fabric of the city, which lay just outside the dock's boundary.

The operation's codename was the idea of the Air Officer Commanding, Air Vice Marshal "Pussy" Foster, who anticipated being "bowler hatted" (dismissed from the service) should the city suffer any damage. Westlake was leader of No 239 Wing, a mixture of Kittyhawk and Mustang squadrons specialising in dive-bombing operations. During the afternoon of March 21, flying a Kittyhawk of No 250 Squadron, he led 64 aircraft on the attack. Twenty-four fighters of the USAAF were also attached to his formation, with a Spitfire squadron providing an escort.

Within a few yards of the dock area were churches and housing; beyond lay a large population and centuries worth of noble buildings and works of art. Once over the target, Westlake assessed that the weather was suitable and he ordered some of the Mustangs and the American fighters to attack the gun defences as he dived almost vertically from 10,000 ft with his four squadrons following him into the attack.

The results were spectacular: a large cargo ship was seriously damaged and left listing, and a number of smaller vessels and naval escorts destroyed. As the last of the Mustangs pulled away there was a huge explosion as a store of sea mines was hit.

The local Italian population stood on nearby rooftops just outside the target area watching the specttacolo with great enthusiasm and admiration. The AOC was equally impressed, and sent a signal of congratulation, relieved that he had avoided a bowler hat. Westlake was awarded the DSO for his "excellent leadership, great tactical ability and exceptional determination".

George Herbert Westlake was born on April 21 1918 at Rangoon, where his father was the harbourmaster. He was educated at Shoreham School and de Havilland Aeronautical Technical School. In 1937 he joined the RAF Volunteer Reserve and began training as a pilot. At the outbreak of war he was called up and soon completed his flying course, when he was commissioned.

After a brief spell instructing other pilots Westlake joined No 213 Squadron, flying Hurricanes during the closing stages of the Battle of Britain. Within a few weeks he had his first success, shooting down a Messerschmitt Bf 109 south of Selsey Bill on November 15 1940.

Six months later No 213 embarked in the aircraft carrier Furious and headed for the Mediterranean. On May 21 his squadron took off from the ship and set off for Malta, 800 miles away. After a hasty lunch, Westlake and his fellow pilots were airborne again, and three hours later landed at Mersah Matruh, in Egypt. In their single-engine aircraft, they had been airborne for almost eight hours, all entirely over the sea.

Within a few days Westlake was detached to No 80 Squadron, operating in Syria. He was soon in action against the Vichy-French Air Force, and in the space of a few days had shot down a bomber and shared in the destruction of two fighters. Once the air threat had been reduced, Westlake attacked airfields and road convoys as the Vichy forces retreated. At the end of the brief campaign he left for Nicosia, where he rejoined No 213.

On July 18 1941 Junkers 88 bombers appeared over the airfield, and Westlake was scrambled to intercept them. He caught one 80 miles off the coast and, in full view of a small Cypriot fishing fleet, he chased it at very low level and shot it down. The Governor of the island gave him a bottle of whisky with the promise of a crate if he repeated his success. In August Westlake shot down an Italian bomber, which crashed near Capo Greco, the first enemy aircraft to fall on the island. Unfortunately for Westlake, the Governor had left the island the day before - but he did receive a tankard. In December No 213 left for the Western Desert, where it was involved in fierce fighting. Westlake was made flight commander and, during the next few months, he shot down five more aircraft and damaged three others. After almost two years of continuous action (during which his aircraft was never hit by the enemy) he left the squadron in the autumn of 1942, when he was awarded the DFC.

Westlake joined No 211 Group of the Desert Air Force as a fighter operations controller and moved forward with the advance to Tunisia. He was involved in planning air support for the invasions of Sicily and Italy before taking command of a mobile operations room as a wing commander, landing in Sicily two days after the troops had gone ashore. Anxious to return to flying, he dropped a rank in order to command one of the first Italian squadrons to fight alongside the Allies, No 4 Stormo, flying the Airacobra on ground attack operations. That month he was appointed to lead No 239 Wing.

Westlake remained in the RAF after the war. He specialised in fighter operations, serving at HQ 12 Group before filling an exchange posting with the USAF at HQ Air Defence Command, Colorado Springs. After commanding the Southern Sector of the UK Air Defence Region, he spent two years at RAF Geilenkirchen in Germany as the wing commander in charge of flying. In 1961 he was promoted to group captain and commanded the RAF's northern fighter control station at Buchan, near Peterhead.

During the Indonesia Confrontation campaign, Westlake co-ordinated air defence operations at HQ Far East Air Force. At the end of 1967 he returned to Britain responsible for flying activities at Signals Command before retiring from the RAF in July 1969.

Westlake spent a number of years in Kuwait, which he much enjoyed, working as the aviation consultant, then manager, of Abdulla Al Rifai and Sons, agents for numerous large British aerospace and engineering companies. He retired to Cyprus, but returned to England in 1994.

Westlake was an expert fly-fisherman and an accomplished artist with a particular aptitude for sketching buildings. With very forthright, sometimes blunt, views, he was excellent company.

In later life his mobility was severely restricted, but he took to an electrically-powered tricycle to travel around Stratford-upon-Avon, where he lived. One neighbour commented that "he drove with verve and great abandon, as if he was still in his fighter aircraft. We all stepped back when we heard him coming."

George Westlake died on January 18. His marriage ended in divorce. His son, a former RAF Harrier pilot, and his daughter survive him. 26 Jan 2006