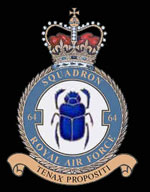 Pilot Officer W V Crawford-Compton of No 485 (New Zealand) Squadron RAF, sitting in the cockpit of his Supermarine Spitfire Mark VB, "Samson", at Kenley, Surrey. At the time this photograph was taken, Crawford-Compton had shot down 3 enemy aircraft. He joined No. 611 Squadron RAF as a flight commander in August 1942, and in December 1942 was given the command of No. 64 Squadron RAF, which he led until July 1943. After promotion to Wing Commander Flying at Hornchurch he lectured on tactics in the USA, returning to operations in April 1944 in command of No. 145 (Free French) Wing of the 2nd Tactical Air Force. His final total was 21.5 victories and, having been awarded the DSO and Bar and DFC and Bar, he became the most highly-decorated New Zealand fighter pilot of the war.

A Supermarine Spitfire Mk IX of No 64 Squadron RAF, the first unit of Fighter Command to be equipped with the type, taxying before take-off at Fairlop, Essex, 2 November 1942.

A few words from a fellow pilot before the engine-start of Supermarine Spitfire Mark IX, BR600 `SH-V', of No 64 Squadron, Royal Air Force at Fairlop airfield in Essex.

Pilot of No. 64 Squadron RAF running towards his Supermarine Spitfire Mark 1A as the Squadron is scrambled at Kenley, 10.45 am, 15 August 1940.

Flight Lieutenant J A Plagis and Flying Officer A J Hancock of No. 64 Squadron RAF, standing in front of a Supermarine Spitfire Mark V at Hornchurch, Essex. They had, between them, shot down 16 enemy aircraft in the air battles over Malta in 1941 and 1942.

Spitfire Mark VC, AA873 Manchester Air Cadet, at the Aeroplane and Armament Experimental Establishment at Boscombe Down, Wiltshire, shortly before conversion to a Mark IX. It subsequently served with No. 64 Squadron RAF.

This image is part of a sequence of five photographs taken on 7 May 1942 at Hornchurch, and later released by the Ministry of Information to illustrate a typical offensive operation. In the bright spring sunshine, a No 64 Squadron Spitfire VB is readied for another sortie.

Photo 01: Another of Rolf von Pebal's photographs taken from one of the low flying Do-l7s of 9./KG76 during the 18 August attack on Kenley in which the airfield was seriously damaged. In this view, a Spitfire of 64Sqn is seen parked unattended and exposed to attack in a blast pen on the northern edge of the airfield perimeter.

Spitfire Mk Ia P9554 flown by Plt Off James O'Meara of No 64 Sqn, Kenley, August 1940. While flying P9554 on 12 and 15 August 1940 O'Meara destroyed three enemy planes, two Bf 109E's and a Ju 88 and further damaged three He 111s. By the end of the war he had achieved 11 and 2 shared destroyed, 1 unconfirmed destroyed. 4 probably destroyed, 11 damaged and 1 shared damaged. On 16 August the CO of No 64 Sqn Donald McDonald (9 destroyed, 1 shared destroyed, 3 unconfirmed destroyed, 1 probably destroyed and 7 damaged) flew this aircraft and claimed one Bf 109E destroyed another as a probable and a third as damaged and also claiming a shared destruction of a He 111 and another one damaged over Kent. When on his way back to Hawkinge McDonald was jumped by a 109 and was forced to bail out of P9554.

Βοth of these Spitfires has confused many researchers and aviation enthusiasts for years. With the photos and information published in this book, the authors believe they have managed to solve the mystery. Plagis was posted to No. 64 Squadron on March 4, 1943, and began flying with his new squadron from April 6 onwards. Although he mostly flew SH-D/AA927, he was soon assigned a new fighter, Spitfire Mk.Vb SH-B/ΒL829. He flew it until the middle of September and it wore the usual 'KAY' along with his eleven Malta kills. This fighter was a standard Spitfire Mk.Vb with the elliptical ‘B’ wing. It was an early Mk.Vb, having the rectangular rear view mirror as well as an external armored windscreen. The aircraft did not carry the nose art on its starboard side. John didn't claim any kills on this aircraft. The last entry of his logbook listing BL829 is September 16, 1943. Fοur days later he flew SH-B again, according to his logbook, but this time BL734 was clearly written in the ORB of No. 64 Squadron. This time his new personal fighter is a Spitfire Mk.Vb LF/LR. On September 18, No. 64 Squadron exchanged their sixteen 'kites' with the ones of No. 118 Squadron. The latter unit was equipped with the Spitfire Mk.Vb LF/LR. This variant had reduced diameter supercharger impeller blades on the Merlin for optimum performance at lower altitudes and the wingtips were removed and replaced by short fairings to improve their rate of roll. The LF (Low altitude Fighter) designation referred to the engine performance and the LR (Long Range) to their ability to carry an external 'Slipper' fuel tank under the belly. Less than a dozen Spitfires were actually built as LF.Vs. These came in the very last batches of Mk.Vc Trop from Westland. All LF.Vbs, and virtually all LF.VCs were conversions from regular, often well worn, Mk.Vs. This led to them being referred to as clipped (the wings), cropped (the supercharger) and clapped (from the English expression ‘clapped out’ meaning extremely tired or worn out). The Spitfires were delivered with elliptical wingtips, although four of them, Plagis’ BL734 was almost certainly one of them, considering he was the A’ flight commander, had clipped wingtips. In the No. 64 ORB it’s recorded that, for an unknown reason, although pilots were happy with their new fighter’s performance, they hoped not to have to clip their wingtips, but instead return the four clipped aircraft to their full wingspan. Plagis flew BL734 from September 21, 1943, until June 17, 1944. While at the controls 'Johnny Spitfire' claimed three more kills which were later painted on the aircraft alongside ‘KAY’. Also, his and his squadron mates aircraft were later built Mk.Vbs as stated above, so were fitted with the circular rear view mirror and internal armored windscreen. All of the above clears any doubt about the famous ‘B’ he flew and often characterized as a Malta 'Spit' serialed as BR329, despite the fact that no record of BR329 ever operated over the island. The real BR329 was a Spitfire Mk.VI and was flown by No. 421 and 124 Squadrons, but it was lost with F/S Eric J. 'Chunky' Phelps.(Copyright Gaetan Marie)

Plagis in front of a Spitfire Mk.IX. The Greek ace was very popular in the newspapers. One of them wrote, when he was awarded the DSO: NEW DSO HAS 'BAG' OF 16
"With a 'bag' of 16 German planes to his credit, Squadron Leader John A. Plagis, a 25-year-old Southern Rhodesian who was just added the DSO to his DFC and Bar, commands an RAF Spitfire Squadron. Joining the RAF in 1940, he was sent to Malta early in 1942 and flew his Spitfire from the aircraft carrier Eagle. He shot down four enemy aircraft in one afternoon, for which he was awarded the DFC. During his six months in Malta, he destroyed 11 aircraft and gained a Bar to the DFC. Another instance of Squadron Leader Plagis's good shooting was the destruction of three raiders within 24 hours. He led the first Spitfire sweep over Sicily, accounting for an Italian fighter. Since his return to Britain, he has been leading Spitfire formations against a variety of enemy targets and has destroyed three enemy fighters. Assuming command of his former Malta unit, he joined a Spitfire Wing led by the 24-year-old Wing Commander Harold Bird-Wilson, DFC, and Bar, of Farnham, youngest man in the RAF holding such an operational post."
(Greeksinforeigncockpits via Jill Plagis)
Plagis 2
John Plagis in the cockpit of SH¥B/BL734, before the end of his service with No. 64 Squadron. 'KAY' carries all the kills achieved by the Greek ace until that time, including the two he claimed with the squadron over France and Holland. The photo was taken around the middle of 1944 at RAF Coltishall with the ASR Walrus as the background (Greeksinforeigncockpits via Jill Plagis)
Plagis 3
John Plagis describes an engagement to S/L Michel 'Mike' G. L. Donnet, using his hands in the classic fighter pilot way. Donnet was a Belgian who escaped to England, using a Stampe SV-4B (Tiger Moth), OO-ATD when Belgium was occupied by the Germans. He volunteered for the RAF and managed to become a W.Cdr at RAF Hawkinge. When Plagis was posted to No. 64 Squadron, Donnet was in charge before being posted to take command of No. 350 (Belgian) Squadron. He had three kills to his credit, one probable kill and five damaged. He was honored with many British and Belgian medals. (Greeksinforeigncockpits via Jill Plagis)