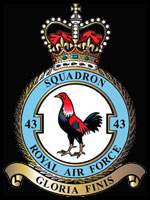 Squadron Leader M Rook, Commanding Officer of No. 43 Squadron RAF, and noted as the tallest pilot serving in the RAF at the time, poses with his new Supermarine Spitfire Mark VC, JK101 'FT-Z', at Jemappes, Algeria.

He did his flight training in the US (and Canada) in 1941-42. While he was based in Texas, due to "political reasons", (pre-Pearl Harbor) the training was provided by "civilian contractors", who he described as "real nutcases, but great flyers!"; they were all ex-stunt pilots and crop dusters!

Apparently, one guy had a trick of taxiing/flying a Stearman trainer with just the tailwheel on the ground!? He also remembered that night flying over Dallas was very impressive, compared to the blacked-out UK at night.

After qualifying, he was posted to RAF Training Command as an instructor and was based in the UK for about a year. He transferred to a training unit in Egypt flying Spitfire VB's, which he felt was slightly under powered (by mid-war standards) and handicapped by the Vokes filter.

Also, once the wheels were down, the landing had to be made very quickly or else the engine would seriously overheat, due to the undercarriage leg obstructing the oil cooler! He said that this was only a problem with MkV's in the Mid-East. It didn't happen in colder climates.

In mid 1944, he was due to be posted to a combat squadron going to Greece as part of the "Balkan Airforce". But due to a minor illness his posting was delayed, so he missed Greece and went to Italy instead, joining 43 Squadron at Florence in September. As well as the Spit Mk.IXc MK528, he remembers occasionally flying a Spit Mk.VIII. The squadron strength was usually 16 Spitfires, divided into two "Flights" of eight aircraft. He is certain that A-flight used red/white codes and spinners and B flight used blue/white.He said this practice was introduced during the time he was with the unit.

At this time, 43 Sqn mainly flew ground support and escort missions in northern Italy, and later into Yugoslavia. He was promoted to Flight Lieutenant and commander of B-flight when "his boss", Flt.Lt. Hedderwick, was KIA in early 1945.

Soon after VE-Day, he had a pointed rudder fitted to MK528, which he said made taxiing "as easy as driving a car", compared to the Spitfire with normal, rounded rudder.

During the summer of '45 he was transferred to Jerusalem as an RAF sector controller, working at the King David Hotel. While he was there, he got to fly a P-51, which he described as "an excellent aircraft!....you could land the Mustang with the brakes on". On a visit to Ramat David airbase, 213 Sqn were in the process of exchanging their Mustang IV's for new Spit IXe's. Naturally, having about 400-500 hours flying time on Spitfires, he asked if he could take one up!.....and was surprised to find his request promptly refused! The 213 boys didn't want anybody playing with their new toys!

But he was then told if wanted to do some flying, he could 'borrow a Mustang instead', as they were soon to be sent back to the UK!

He was shipped back to the UK, for demobilisation in early 1946 (so he luckily missed the bombing of the King David Hotel!), and is now 85 and lives in Newcastle, UK. His name is George Edwards.