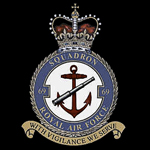 Motto: With vigilance we serve.

Formed on 28 December 1916 from a nucleus of Australian personnel at South Carlton. It operated a variety of types as it worked up to operational status, which took nine months, eventually moving to France as a Corps recce squadron in September 1917. The squadron was re-designated No 3 Squadron Australian Flying Corps on 19 January 1918, effectively ending its career as an RFC unit.

No 431 Flight in Malta had been formed to operate Maryland aircraft in the strategic reconnaissance role in August 1940 at North Coates but transferred to the island in September. However, on 10 January 1941, the Flight was raised to squadron status as No 69 Squadron. It operated across the whole Mediterranean area from Italy in the North to Libya in the South and gradually collected a wide range of types for the role. These included Hurricanes, Spitfires, Beaufighters, Mosquitos, Baltimores and Wellingtons. Some of these type also undertook more anti-shipping and anti submarine patrols.

However, in April 1944 the squadron was transferred back to the UK, where it joined No 34 (PR) Wing of 2nd TAF. It was now equipped purely with the Wellington XIII and undertook the unique task of night reconnaissance, using flares, starting on the night of 5 June. In September the squadron moved to France and continued to be the only squadron carrying out these duties until VE-Day. Following the end of hostilities the squadron undertook surveys of Scandinavia, being disbanded in Denmark on 7 August 1945.

The following day No 613 Squadron was re-numbered 69 at Cambrai, being equipped with Mosquito VIs, however seven months later, on 31 March 1946, the squadron was disbanded; still at Cambrai. A new No 69 was formed on 1 April 1946 when No 180 at Wahn was re-numbered. It still operated Mosquitos but now in the light bomber role. Again just over a year later, 6 November 1947, the squadron disbanded, having relocated to Tangmere for a month (April/May 1947) at Wahn. No 69's final incarnation, so far, began on 1 October 1954 as a Canberra reconnaissance unit at Laarbruch, where it remained until 1 April 1958 when it was re-located to Luqa in Malta, being disbanded there on 1 July 1958 by being re-numbered No 39 Squadron.

No.69 Squadron was formed on Malta as a reconnaissance squadron, and spent three years operating a wide range of aircraft from the island, before in 1944 returning to Britain to take part in the invasion of north western Europe.

The squadron was formed on 10 January 1941 by the re designation of No.431 Flight. Over the next three years it operated the Martin Maryland, Bristol Beaufighter, Hawker Hurricane, Supermarine Spitfire, Bristol Beaufort, Bristol Blenheim, de Havilland Mosquito and Martin Baltimore. Most important of these were the Maryland, which made up the bulk of its strength until May 1942, the Spitfire, which then took over the reconnaissance tasks and the Baltimore, which was used for anti-submarine patrols.

In April 1944 No.69 Squadron moved to Britain, where it converted to the Vickers Wellington and was allocated to the 2nd Tactical Air Force. Operations began on D-Day, when the squadron was used to drop flares to locate German troop movements at night. The squadron continued to fly reconnaissance missions with its Wellingtons until 7 May 1945. It then spent several months surveying Norway and Denmark, before being disbanded on 7 August 1945.