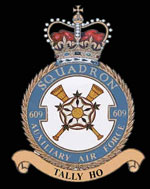 Formed at Yeadon on 10 February 1936 as part of the Auxiliary Air Force, it was initially equipped with Harts, later receiving Hinds in December 1937. It was redesignated a fighter squadron on 8 December 1938 but did not receive its first Spitfire until August 1939.

It remained in the North of England and Scotland until it moved to Northolt in May 1940, from where it covered the Dunkirk evacuation. During the Battle of Britain it operated from Middle Wallop and later carried out sweeps over the continent from various bases.

In April 1942 it began to re-equip with the Typhoon and it carried out its first operation in June. Initially flying defensive patrols, it later undertook intruder operations, both day and night until joining 2nd TAF in March 1944. At this time it started to specialise in the use of a new weapon, the Rocket Projectile. It provided air support to 21st Army Group throughout its actions in France, the Low Countries and into Germany, where it disbanded on 15 September 1945.

With the reactivation of the Royal Auxiliary Air Force, 609 was reformed on 10 May 1946 at Church Fenton as a night fighter squadron. It was initially equipped with Mosquito NF 30s, until September 1948, however, Spitfire LF 16s had started to arrive the previous April and on completion of re-equipment, it was redesignated a day fighter squadron. These were remained until January 1951 when it converted to the Meteor F 8, although it had received some Vampires from November 1950 to January 1951. However, along with all the flying units of the RAuxAF, it was disbanded on 10 March 1957.

It was reformed in 2001 from The Air Defence Support Squadron of the RAuxAF based at Leeming and its personnel now support the Tornado F 3 units based on the station.