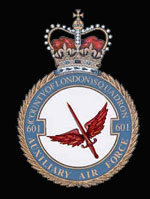 No 601 (County of London) Squadron

No 601 (County of London) Squadron

Motto: None - The reason for this as quoted by Flt Lt Robin van Geene is: -

"600 and 601 Sqns had a great pre war rivalry, being both formed on the same day, and both based in adjacent hangers at RAF Hendon (Now the main building of the RAF Museum) When it came to choosing a crest and motto 601 chose the Latin for "One more than 600" i.e. 601 However this was considered by the College of Heralds, who never it seems had a sense of humour, to be a slight on the worthy name of 600 Sqn. The CO of 601 then decided if he couldn't have the motto he wanted, he wouldn't have a motto at all."

Formed at Northolt on 14 October 1925 as a light bomber squadron in the Auxiliary Air Force. As one of the first two Auxiliary squadrons, it was May 1926 before flying could begin and this was initially carried out on the Avro 504K. Operational aircraft arrived the following year in the form of DH9As. Wapiti's began arriving in November 1929, but the DH9As continued in use for another year. Conversion to Harts began in February 1933 and was completed by June. It continued in this role until 1 July 1934 when it was redesignated a fighter squadron, however, it was not re-equipped with Demons until August 1937.

Gauntlets arrived in November 1938 but in the following January it began converting to the twin engined Blenheim, which it took to war on patrol in September 1939. Single seat fighters returned in March 1940 with the arrival of Hurricanes. It operated from the UK except for a small detachment sent to France, taking part in the Battle of Britain and later conducting fighter sweeps and escort duties over the continent.

In August 1941, the squadron was chosen to introduce a new type into RAF service, the American Bell P39 Airacobra. However, this type was found totally unsuited to operations in the European environment and in March 1942, 601 reverted to Spitfires. The following month saw the squadron embark for the Middle East, flying off the carrier USS Wasp to join the air battles over Malta. In June the squadron moved to Egypt where it joined the Desert Air Force, continuing to fly operations in North Africa until June 1943 when it moved back to Malta in order to support the invasion of Sicily. It moved into Sicily after the landings and later supported the Eighth Army through Italy until disbanding on 7 May 1945.

With the reactivation of the Royal Auxiliary Air Force, 601 was reformed on 10 May 1946 at Hendon as a day fighter squadron. It was initially equipped with Spitfire LF 16s until December 1949 when Vampire F 3s replaced them fully. These were replaced by Meteor F 8s beginning in August 1952 but along with all the flying units of the RAuxAF, it was disbanded on 10 March 1957.

Aircraft operated by no. 601 Squadron

Bases and airfields used by no. 601 Squadron