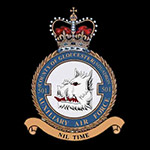 RAF No 501 (County of Gloucester) Squadron

Formed as a Special Reserve squadron at Filton on 14 June 1929, it was composed of a mixture of regular and reserve personnel, initially operating under the name 'City of Bristol' but this was changed to 'County of Gloucester' on 1 May 1930. Operating in the day bomber role it was initially equipped with DH9As, replacing these with Wapitis in 1930 and Wallaces in 1933. On 1 May 1936 the squadron was transferred to the Auxiliary Air Force and in July it received Harts, these in turn being replaced by Hinds in March 1938.

In December 1938, the squadron began converting to the fighter role, receiving its first Hurricanes in March 1939. It provided fighter cover for the AASF in France from May 1940, where it acquired an enviable reputation. It served throughout the Battle of Britain and in early 1941 began offensive sweeps over the continent. Converting to Spitfires in April 1941, the squadron moved to Northern Ireland in October 1942.

With the reactivation of the Royal Auxiliary Air Force, 501 was reformed on 10 May 1946 at Filton as a day fighter squadron, its initial equipment of Spitfire LF 16s arriving in November. Vampires began to arrive in November 1948 with the last Spitfires having left by January 1949. FB 5s replaced F 1s from March 1951 and it operated these until, along with all the flying units of the RAuxAF, it was disbanded on 10 March 1957. Some FB 9s were received in February 1955 but these had been retired before disbandment. It was re-formed as a RAuxAF in the Operations Support role at Brize Norton in 2001 absorbing No 2624 Squadron RAuxAF Regiment.

No. 501 Squadron was the fourteenth of the twenty-one flying units in the Royal Auxiliary Air Force, the volunteer reserve part of the British Royal Air Force. The squadron won seven battle honours, flying Hurricane, Spitfire and Tempest fighter aircraft during World War II, and was one of the most heavily engaged units in RAF Fighter Command. In particular, the Squadron saw extensive action during the Battle of France and Battle of Britain. At present the unit is not flying anymore and has a Force Protection role.

The squadron was originally formed as a day-bomber unit named No 501 (City of Bristol) Squadron as part of the Special Reserve squadrons on 14 June 1929, made up of volunteers and regulars, flying D.H.9As, which were later replaced with Westland Wapitis and later still with Westland Wallaces. In 1936 it became 'No 501 (County of Gloucester) Squadron', changing the name to embrace a larger area of recruitment. On 1 May 1936 it was transferred to the Auxiliary Air Force and in July of that year the squadron converted to Hawker Harts. In March 1938 these were exchanged for Hawker Hinds, but at the end of 1938 No. 501 squadron was transferred from RAF Bomber Command to RAF Fighter Command, and Hawker Hurricanes began to arrive in March 1939.

When war was declared in September 1939, 501 Squadron was based at RAF Filton, near Bristol. On 10 May 1940, the Squadron became part of the Advanced Air Striking Force (AASF) and moved to France where it saw extensive action, stationed at airfields as Bétheniville, Anglure, Le Mans and Dinard. After the retreat from France through Saint Helier, Jersey, its battle-hardened pilots were re-organised at RAF Croydon and then moved on to RAF Middle Wallop and later RAF Gravesend (now Gravesend Airport). It subsequently served at RAF Kenley, south London, until 17 December 1940. At Kenley, the squadron was commanded by S/Ldr. Harry Hogan and still was equipped with Hawker Hurricanes. Supermarine Spitfires arrived in April 1941. Between November 1943 and October 1944 the squadron formed part of Air Defence of Great Britain and by that time flew Tempest Mk.Vs on 'Anti-Diver' patrols. The squadron was disbanded at RAF Hunsdon the end of the war on 20 April 1945. During World War II the pilots of no. 501 squadron had flown 11.140 operational sorties, in which they shot down 201 enemy aircraft and at least 84 V-1 flying bombs.

The squadron included several notable pilots of WWII, including Sergeant Pilot Antoni (Toni) Glowacki VM, CV and 3 bars, DFC, DFM, who shot down five German aircraft on 24 August 1940 to become the first of only two pilots to achieve 'Ace-in-a-day' status during the Battle of Britain. Among others who achieved fighter ace status were Ken Mackenzie, 'Ginger' Lacey, Stanisław Skalski, Robert Dafforn and Kenneth Lee. Lacey was one of the highest scoring pilots in the Battle of Britain.

Into the jet age

The squadron was reformed on 10 May 1946 as an Auxiliary Air Force fighter squadron at RAF Filton. In February 1957, Flt Lt John Crossley flew Vampire FB.9 jet WR260 beneath the Clifton Suspension Bridge, before a fatal crash into Leigh Woods. This was the last recorded -and only jet aircraft- flight under that bridge. The Squadron was disbanded in March 1957, along with all the other Auxiliary units.

*=Remained in service after replacement as main equipment Squadron bases

Bases and airfields used by no. 501 Squadron RAF