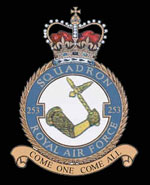 Motto: Come One, Come All

Formed by amalgamating Nos 412, and 413 (Seaplane) Flights with Nos 511, 512 and 513 (Special Duties) Flights at Bembridge on 7 June 1918. The seaplane flights were equipped with Short 184s and Short Campanias, whilst the land based special duties flights used DH6s. All types were used for anti-submarine patrols right up until the Armistice, with the unit being disbanded on 5 May 1919.

The squadron reformed on 30 October 1939 at Manston as a Blenheim coastal fighter unit, however, no aircraft were received and in February 1940, it began to receive Hurricanes, becoming operational in April. As the losses in France mounted, one flight was detached to join the BAFF, whilst the other flew over daily to operate from French bases but returned to Kenley every evening. With the fall of France, the squadron retired to Kirton-in-Lindsey, where it re-equipped until July, when it moved even further north to Turnhouse and later Prestwick.

The squadron finally joined the action in the south in August when it moved to Kenley, remaining there until January 1941 when it was rested at Leconfield. From February to September 1941, the squadron provided air defence cover for the Orkneys, returning south to fly convoy and coastal patrols along the East Coast. In August 1942, it was detached to Friston, from where it flew in support if the Dieppe landing, but two months later it was preparing for a move overseas.

It arrived in Algeria on 13 November 1942 and provided air cover for the 1st Army and its supply lines for the remainder of the North African campaign. In June 1943 it moved over to Sicily and the following October transferred to Italy. During this period, the squadron converted from Hurricanes to Spitfires and from February to April 1944 it flew anti-shipping operations and escort mission from Corsica, before returning to Italy, from where it continued these types of operations over the Balkans. The squadron finally moved into its area of operations in April 1945 when it relocated to Prkos in Yugoslavia itself. With the end of the war, it undertook occupation duties in Northern Italy and Austria, disbanding at Treviso on 16 May 1947.

No 253s final incarnation began on 18 April 1955 when it reformed as a night fighter squadron at Waterbeach, equipped with Venom NF Mk 2s, but this part of its career was short-lived as it was disbanded on 1 September 1957.