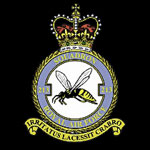 Formed on 1 April 1918 by re-numbering No 13 Squadron RNAS. This unit had been formed in June 1917 as the Seaplane Defence Flight and was tasked with defending the Seaplanes operating out of Dunkirk. It was redesignated No 13 (Naval) Squadron on 15 January 1918. It continued its fighter and escort role until the end of the war and returned to Britain (Scopwick) in March 1919, where it disbanded on 31 December of that year.

The squadron reformed, again in the fighter role on 8 March 1937 at Northolt. Equipped with Gauntlets it moved to Church Fenton in July 1937 and in May 1938 to Wittering. At Wittering it re-equipped with Hurricanes in January 1939 and a detachment of these was sent to France in May 1940 with the rest of the squadron moving to Biggin Hill in June. It remained in the south throughout the Battle of Britain, although it was in the South-West until September when it moved to Tangmere. November 1940 saw it move back to Yorkshire and February 1941 a move further north to Castletown in Scotland.

However, in May 1941, the squadron boarded HMS Furious, from where it took off on the 21st of the month to Malta. Following refuelling the squadron carried on to Egypt but its aircraft were attached to other units and it was July before the squadron operated in its own right, when it took part in operations over Syria. It then went to Cyprus until December 1941 when it returned to Egypt. Air Defence duties were followed by offensive mission from June 1942 after which the squadron moved westwards supporting the 8th Army following the breakout at El Alamein. During this period the squadron actually operated from bases behind the enemy lines.

In March 1943 it undertook night defence duties and convoy patrols until July when it returned to the Nile Delta area where it carried out shipping patrols and occasional sweeps over Crete. The squadron re-equipped with Spitfires in February 1944 and in July moved to Italy as part of No 283 Wing, having re-equipped again in May, this time with Mustangs. These were used to good effect in ground attack missions over Yugoslavia and Albania, the squadron becoming part of the Balkan Air Force when it was formed in June 1944.

With the end of hostilities, the squadron moved to Palestine in September 1945 and a year later to Cyprus, where it was to become a permanent component of the Middle East command. Tempests F Mk 6s were received in January 1947, taking these to Egypt in early September and the Sudan in October. Another move within the area took place in August 1948, when the squadron went to Mogadishu in Somaliland, before returning to Egypt two months later, where it re-equipped with Vampires. It continued to fly these on air defence duties in the Canal Zone until disbanding at Deversoir on 30 September 1954.

Less than a year later the squadron reformed on 1 September 1955, although at this stage it did not receive any aircraft. These arrived in March 1956 and it was now a Canberra Interdictor unit, forming part of the Bruggen Wing in Germany, being equipped with the B(I) Mk 6 model of the aircraft. It continued to operate the type until 5 December 1969 when it disbanded for the last time.