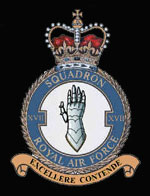 Forming at Gosport on 1 February 1915, No 17 completed its training and then embarked for Egypt where it arrived on 11 December and undertook it first reconnaissance sortie on Christmas Eve. It continued to operate, usually in detached flights, in Egypt and the Western Desert until July 1916, when it was sent to Salonika.

Initially equipped with a mixture of BEs and fighters (DH2s and Bristol Scouts) it was the only squadron operating in Macedonia for quite a while. Following formation of the RAF the fighter element was hived off to form No 150 Squadron and 17 continued in the tactical reconnaissance role for the rest of war. With the end of the war the squadron, by then equipped with FK8s and DH9s, was given a flight of Camels and had the FK8s removed. In January 1919 'A' Flight was sent to support the White Russians whit 'B' and 'C' going to Constantinople, however, on 14 November the squadron was disbanded.

It was nearly five years before the squadron was reformed, on 1 April 1924, and it was now equipped with Sopwith Snipes as part of the UK air defence network. It continued in this role until November 1941 when it embarked for the Far East. During that period it was equipped with Woodcocks, Gamecocks, Siskin IIIAs, Bulldog IIs, Gauntlets and Hurricanes. It remained in Britain during the early days of the fighting in 1940, although it did operate from the Channel Islands and was briefly based at Le Mans to cover the evacuation of the BEF. It participated in the Battle of Britain but in April 1941 moved up to Scotland, where it remained until moving out to the Far East.

The Japanese attack on Malaysia and Singapore put paid to any hope of the squadron reinforcing the defences and instead the squadron was diverted to Burma, where it attempted to stem the Japanese advance on Rangoon. With the airfields overrun the squadron began making its way north and eventually managed to make it back to Calcutta where it was able to re-assemble. It now took part in the defence of that part of India and from February 1943 begun ground attack missions. In August 1943 it moved to Ceylon where Spitfire VIIIs began to replace the Hurricanes in March 1944. These were taken back to Burma in November and then in June 1945 the squadron was withdrawn in order to prepare for the invasion of Malaya, however, the dropping of the atomic bombs on Japan negated the need for the invasion and the squadron was simply transported to the landing beaches by carriers. No 17 joined the Commonwealth Air Forces of Occupation in Japan in April 1946 remaining until disbandment on 23 February 1948.

With the rundown of the post war air force, it t became necessary to allocate squadron numbers of famous 'fighting' squadrons to 'second line units. As a result No 691 Squadron, an anti-aircraft co-operation unit, at Chivenor was renumbered 17 on 11 February 1949. The squadron continued in this role, equipped with a variety of types until disbanding again on 13 March 1951.

The reformed five years later on 1 June 1956 at Wahn as part of RAF Germany in the photographic reconnaissance role equipped with Canberra PR7s. Moving to Wildenrath in April 1957, the squadron continued in this role until 31 Dec 1969. On 1 September a new No 17 Squadron was formed in Germany, this time at Bruggen and equipped with the Phantom FGR Mk 2. However, the equipment of ground attack reconnaissance units with Phantoms was purely a stop-gap until the availability of Jaguars. As a result No 17 (Designate) Squadron began training at Bruggen on 1 September 1975. On 30 January 1976 the Phantom unit disbanded and the Jaguar unit took over the numberplate the following day. A similar process took place in 1985 when No 17 (Designate) Squadron began training with Tornado GR Mk 1s. Training complete, disbandment of the Jaguar unit and the hand over of the numberplate to the Tornado unit took place at Bruggen on 1 March 1985. With the pending withdrawal of RAF flying units from Germany, No 17 disbanded on 31 March 1999. The squadron was re-activated at Warton in 2003 as the Typhoon Operational Evaluation Unit and it soon began training on its new equipment alongside the testing being carried out by British Aerospace. The unit eventually moved to RAF Coningsby in April 2005, where it was formally reformed on May 19. In early 2010 the squadron was redesignated as a Test and Evaluation Squadron and took over duties previously carried out by the Fast Jet Testing Squadron at Boscombe Down.