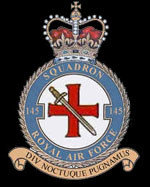 Motto: Diu Noctuque Pugnamus (We fight by day and night)

Formed on 15 May 1918 at Aboukir in Egypt as a fighter unit under the command of Maj R M Drummond. Equipped with SE5As it moved to Palestine in August where it supported General Allenby's offensive against the Turks, disbanding at Suez on 2 September 1919.

The squadron next reappeared in the Order of Battle on 10 October 1940, when it was reformed, again in the fighter role, at Croydon. The following month it received Blenheim fighters but the following March these were replaced by Hurricanes. Whilst remaining in Britain, the squadron operated over Northern France and covered the evacuation from Dunkirk. It was involved in the Battle of Britain, moving to Tangmere in May and its satellite at Westhampnett in July, until being moved to Scotland in August for a rest. One interesting point at this time is that the original squadron badge featured a Turkish Scimitar, but now that Turkey was an ally, the Air ministry instructed the squadron to replace it with a sword, to avoid causing any offence.

Initially based at Drem it moved to Dyce later in the month and stayed there until returning south in October. Its Hurricanes were replaced by Spitfires in January 1941 and with these it moved onto the offensive. In July 1941 it moved to Catterick in Yorkshire and remained there retraining pilots for Spitfires and conducting North Sea patrols until embarking for the Middle East in February 1942.

Arriving in April, it began operations over the Western Desert in May, becoming the first Spitfire squadron in the theatre. It carried out fighter patrols and bomber escort mission until the end of the North African campaign, after which it moved to Malta in June 1943. From Malta, the squadron supported the Sicilian landings after which it became the first Spitfire squadron to operate from the island, enabling it to support the Allied landings in Italy. The squadron moved to the Italian mainland in September 1943, still in the fighter role. Lack of opposition resulted in the squadron moving to the ground attack role and in June 1944, it was officially reclassified as a fighter bomber unit, a role in maintained until the end of the war. It disbanded at Treviso in Italy on 19 August 1945

The squadron number was kept alive from 11 February 1949 until 28 February 1952 by being linked to No 85 Squadron, however the following day, 1 March 1952, the squadron was reformed as fighter bomber unit equipped with Vampires at Celle in Germany. Venoms arrived April 1954 and these were operated until 15 October 1957, when the squadron disbanded. The squadron number has been used on three subsequent occasions as a 'Shadow designation for Operational Conversion Units. From 22 October 1958 to 1 June 1963 it was allocated to the Hunter equipped No 229 OCU at Chivenor. The same day it was transferred to No 226 OCU at Middleton St George, which was responsible for training Lightning pilots. No 226 moved to Coltishall in April 1964 and retained the 145 as a shadow designation until re-numbered No 65 on 1 September 1970.

List of some known Aerial Victories scored over North Africa

List of aircraft damaged during air combat over North Africa