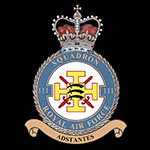 Formed at Deir-el-Belah in Palestine as a fighter unit on 1 August 1917, it was equipped with a variety of types, which it used to support General Allenby's campaign against the Turks. By July 1918, the squadron had standardised on the SE5A and these were used until February 1919 when the squadron was re-equipped with Bristol F2Bs in Egypt, where the unit had moved in October, disbanding there on 1 February 1920 when it was renumbered No 14 Squadron.

The squadron reformed on 1 October 1923 at Duxford, initially equipped with a single flight of Grebes, with a flight of Snipes being added on 1 April 1924 and a third flight, composed of Siskins, in June. In January 1925, the Grebes and Snipes were retired, the squadron being wholly equipped with Siskins, which were retained until January 1931, when Bulldogs arrived. Gauntlets became the squadron's last biplane equipment in May 1936 as it became the first RAF squadron to operate the Hawker Hurricane in January 1938.

Unlike many other Hurricane units, 111 operated from Britain during the early months of World War Two although following the German invasion, it sometimes operated from France forward airfields. Having covered the Dunkirk evacuation, it took part in the Battle of Britain until early September 1940, when it was sent to Scotland to rest and re-equip. A return south in July 1941 allowed the squadron to carry out offensive operations over France, which it continued until September 1942, when it was earmarked for overseas service.

It arrived in Gibraltar in early November 1942 and following the successful invasion of North Africa it moved into Algeria five days later. It provided air cover to the 1st Army during the Tunisian campaign and then moved to Malta, from where it covered the Allied landings in Sicily. From Sicilian bases it covered the Italian landings, moving onto the mainland in September 1943. In preparation for the invasion of Southern France the squadron moved to Corsica in July 1944, covered the landing and then moved to French airfields to support the ground forces until returning to Italy in October. For the rest of the war it carried out fighter-bomber operations and then joined the occupation forces in Austria, eventually disbanding on 12 May 1947.

In order to keep the squadron number active it was briefly linked to No 66 Squadron between 11 February 1949 and 1 November 1953. However, on 2 December 1953 the squadron was reformed in its own right as a fighter unit equipped with Meteor F Mk 8s at North Weald. Hunters replaced the Meteors in June 1955 and during this period it provided one of the RAF's most famous aerobatic display teams, The Black Arrows. In 1958, the squadron set a record which still stands when it performed a formation loop consisting of 22 aircraft.

In April 1961, the squadron re-equipped with Lightnings at Wattisham, where it had been based since 1958 and theses continued in use until September 1974. On 1 July 1974 No 111 (Designate) Squadron began forming at Coningsby on the Phantom FGR Mk 2. When this unit was fully worked up, the Lightning unit disbanded on 30 September 1974 and the following day the numberplate was transferred to the Phantom unit at Coningsby. In 1975 the squadron moved to Leuchars and in January 1978 Phantom FG Mk 1s began to arrive and by October 1979 the FGR Mk 2s had left the squadron. Further re-equipment came in January 1990, when the squadron converted to Tornado F Mk 3, which it operated at Leuchars until disbanding on 22 March 2011, when the Tornado F Mk 3 was retired from service.