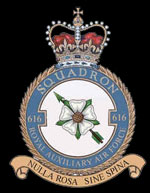 In a long tradition of groups of individuals providing arms to their warriors, the manufacture of some Spitfires and other aircraft were funded by donors. Approximately 1500 “presentation” Spitfires were produced and most presentation aircraft were Spitfires. This way a government could offset the large expense of producing these aircraft. A Spitfire airframe was listed as £ 5,000 but £ 12,000 would be more accurate. Hyderabad Sqn was named after the Nizam of Hyderabad donated the entire squadron of DH9. Lord Beaverbrook took this practice to an industrial level. RAF regulations stated the donors name, or a chosen caption, was to be placed on the fuselage with 4 inch yellow characters, usually near the nose or cockpit. The regulation was not always adhered to closely as with the WB crest. These “names” were sometimes moved from one aircraft to another if there was a close association between the donor and squadron but the equipment changed or the old one was destroyed. Jack and Harry Warner were some of the few influential Americans in the 1930’s who recognized the threat fascism posed towards the US.

They were young immigrants themselves and had some experience with anti-Semitism. They would lobby Washington and have discussions with Roosevelt about Nazi activities. Warner Bros ended all relations with Germany in 1934. They produced pictures such as Bosko's Picture Show, Black Legion and Confessions of a Nazi Spy. “Sergeant York” is based on the WWI hero who often publicly sparred with pro-Nazi Charles Lindberg about anti-intervention. Profits from the documentary film “London Can Take It” went to a Spitfire fund. All this activity landed the Warners into some hot water with some US authorities. The PCA (Production Code Administration), a film industry self-regulatory agency, banned anti-Nazi propaganda in 1934 but reversed this later in 1941.

A US Senate sub-committee hearing, the Nye-Clark hearings, accused Hollywood of being a Jewish monopoly conspiring with Roosevelt to drag the US into the war. Of course these hearings became irrelevant in December 1941 and stopped. Roosevelt was quick to utilize film in the war effort and WB produced many during the war. In my younger days I went to film festivals and one included old, seldom seen WB cartoons. Bugs bunny was in there. These are never shown on TV. They were made before and during the war and are considered not suitable for broadcast. I saw why. They are racist these days with their German and Japanese portrayals.

The “Cordell Hull”, Spitfire Vb, s/n W3432, came into service July 22, 1941 beginning with 616 Sqn. It was presented by Warner Bros September 30, 1941. It saw action in the Battle of Britain based out of Yorkshire and Kenley. Later it would fly sweeps over Northern France and provide bomber escort. Battles with Adolph Gallands fighters were frequent. Cordell Hull was the US Secretary of State from 1933-44 and was considered a pro-interventionist. He played a key role in the creation of the United Nations and got a Nobel Peace Prize. Al Gore is a member of the Friends of Cordell Hull which maintains the birthplace and museum in Picket County Tennessee.

The “President Roosevelt”, Spitfire Vb, s/n W3430, came into service July 20, 1941. It was presented by Warner Bros September 30, 1941. It flew in the Battle of Britain as part of the Biggin Hill sector, 72 Sqn during 1941. It joined 222 Sqn May 14, 1942 and performed fighter sweeps over Britain. I think we know who Roosevelt was. A digital image of the letter between Jack Warner and Roosevelt discussing “donation of spitfire planes” dated September 30, 1941 is kept at the Roosevelt Presidential Library. I have tried to present this information factually and did not intend to politicize any subjects.

He and his twin brother Ken were born in Christchurch. Both joined the Royal Air Force. Ken died in a flying accident on 1 May 1940.

Colin Gray joined 54 Squadron in November 1939. After initial combats on 24 May (claiming two 'probable' victories) he downed his first confirmed enemy aircraft, a Messerschmitt Bf 109, on 25 May 1940, while escorting a formation of Fairey Swordfishes to dive-bomb Gravelines. His Spitfire was badly damaged in the engagement, and damage to the port aileron forced the aircraft into a dive that was controlled only with great difficulty. Gray's aircraft had also lost its airspeed indicator and control of guns, flaps or brakes. However Gray managed to force land safely at his base in Hornchurch.

By early September, Gray had claimed 14.5 kills, as his squadron was sent North to rest and re-equip after being heavily engaged in the Battle of Britain. After a brief month stay with 43 Squadron, he returned to his old squadron as a flight commander in January 1941.

In June, he was posted to No. 1 Squadron, again as a flight commander, claiming a share in a Heinkel He 59 off Folkstone in June 1941.

Returning to operations in September 1942, he was attached briefly to No. 485 Squadron for operational experience before taking over No. 64 Squadron, flying the new Mark IX Spitfire.

In early September, he returned to England, with a final total of 27½ confirmed victories, six (and four shared) probables, and 12 damaged, in 511 operational sorties. He commanded 61 OCU at Rednal and in July 1944, was appointed Wing Commander Flying of the Detling Wing. In July he transferred to RAF Lympne, overseeing the Griffon-engined Spitfires engaged in anti V-1 operations over the south coast.

After the war, he continued in various command and staff posts, and was involved in the fighting in the Malayan Emergency. He retired as a Group Captain in 1961 and returned to New Zealand to work for Unilever as personnel Director until 1979.

In 1945, he married Betty Cook, with whom he had two sons and two daughters. He also wrote Spitfire Patrol, an autobiography detailing his time in the RAF. Gray died in Waikanae on 1 August 1995.