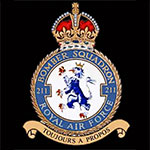 The squadron letters on Blenheim Is of this period have been interpreted as dull red by many illustrators, but at this date, given the Air Ministry Orders of the day and the various other examples in photographs, it is hard to conclude anything other than that they are dull grey.

Seen in one photo with the Squadron's war-time UQ code but without an individual letter, L6670 apparently operated as UQ-R.

Damaged by CR.42 attack in an early afternoon raid on Derna. Forced-landed, wheels up, near by. S/Ldr Bax, Sgt Bain, AC Wise all safe but PoW—Bax with a broken leg.

Nine aircraft attacked targets South of Valona on New Year’s Eve 1940. Intercepted by several fighters, on the return leg the port engine of L1540 was seen to be on fire. The aircraft was last seen leaving the formation but under control some 20 miles South of Valona. Sgt Bennett, Sgt Tunstall and Sgt France were posted missing believed killed and are commemorated on the Alamein memorial. It was many years before the crash site and probable resting place of the crew was found, near the Albanian village of Mavrove.

After the loss of L8511 on Corfu in November 1940, Squadron Leader JR Gordon-Finlayson (GF or 'The Bish') and his crew P/O Davis and P/O Geary returned in triumph to the Squadron. Within five days, they had a replacement aircraft, ex 84 Squadron: L6670. Taking it up for an air test on 29 November with F/Sgt Bagshaw (IC ‘A’ Fight groundcrew), GF seems to have liked his 'new war horse'. Nine times in the first three weeks of December, he and the boys flew L6670 from Menidi to raid the Italians, deep in Albania.

Easter Sunday 1941 raid as above. About the same time as Godfrey and co in L8449 were under attack, in L8664 F/O CEV Thompson DFC, P/O Hogarth, F/Sgt W Arscott were also severely hit and also in flames. Their aircraft crashed on the Northern side of the Mikrilomni—Karies road, near Karies, about 2 miles from the lake, not far from the crash-site of Jimmy James’ L1539. The three men did not survive. Godfrey and James were able to bury their friends, however, they are among the missing 211s commemorated on the Alamein Memorial. Karies: also referred to as Karia, Karya, and Karie.