B26 41-34971, co piloted by my father 2nd Lt Andrew G. Lindsay, US Army Air Corp, was shot down on 22 Aug 1943. However, he was not a POW, contrary to your webpage. He escaped with the aid of the French Underground ultimately arriving back in the UK in Feb 44 after several months of successful evading.
Daniel A Lindsay
Major, USAF-retired

Hello Mathew: I stumbled across your website today. There is a photo of a B26 crew in front of a plane named "Pay OFF" (negative #B-69804A.C.). My father's older brother, W.T Caldwell, was the pilot of that aircraft on August 22 1943 and was KIA that afternoon. His normal plane was "Box Car." But, for some reason, he was flying this plane that day. He is not in the photo. So I assume this is an image of the regular crew. I believe August 22nd was the 8th mission for this bomb group. Since there are four bombs below the name, I assume this picture was made just a few days before this Marauder was shot down. Lieutenant W.T Caldwell was posthumously awarded the Distinguished Service Cross.

I've attached a section of a description of the the 8th mission of 386 Bomb Group written by historian Chester Klier. It can be found at B26.com.

Thank you for your efforts to document the history of our WWII armed forces and these men. I stopped and composed this note when I discovered this photo. I'm going to continue to look for "Box Car" and I'll drop you another note if I find it. Or, shoot me a note if you have any info about "Box Car."

Lieutenant Wilma T. Caldwell wrote in his diary, "Up at 3:00 A.M. for briefing. We were in the planes and ready to go, but mission was scrubbed!" The next entry for this date would be written late in the evening, and by a different hand! The mission was rescheduled for late afternoon. Bomb load for each aircraft will be ten 300 pound general purpose demolition bombs. Both nose and tail fuses set for one-tenth second delay. Any bombs not dropped on target will be jettisoned into the channel.

Lieutenant W.T. Caldwell was flying a ship named "PAY OFF" 134971 RU-Q in number six position of the low flight in the second box. He was taking 20mm hits in the bomb bay, smoke began to pour out as the fire spread. His right engine burst into flame, he was able to hold formation momentarily, then took his plane out of formation to the left. Tech Sergeant C.H. Burdick, Jr. was wounded as he manned the top turret of that plane. One parachute appeared as the ship lost altitude, but was still under control as it entered a cloud bank. He picked up a bit of altitude and headed toward the formation, a second parachute was seen to open. The plane rolled over on its back and then into a vertical dive. The aircraft came through the second cloud bank in three parts, all burning fiercely as viewed by the Captain Caney crew flying "BOOMERANG" 131631 RU-G, they were in the number four position of the lead flight in the second box.

Co-pilot on the Caldwell crew, Lieutenant Andrew Lindsey picks up the narration just prior to his bailing out of the stricken bomber: "The gasoline and hydraulic lines had been punctured, the hydraulic fluid and gasoline made a furnace of our bomb bay almost at once. Under those circumstances the likely hood of an explosion was present every second. W.T. with complete disregard for his own life maintained control of the aircraft until his crew could abandon it. No more could be expected of any man. When I left the cockpit, W.T. was still on the controls, smoke was so thick I could see the instruments only with difficulty." End of co-pilot statement. Lieutenant Lindsey received burns on his face and hands as he exited the plane.

The Caldwell crew: Lieutenants W.T. Caldwell, Jr. KIA—A.G. Lindsey, evaded—F.A. Schultz. KIA—Tech Sergeant C.H. Burdick, evaded—Staff Sergeants W.A. Callahan, POW—E.C. Sharpe, POW. Callahan managed to make contact with some members of the French Underground and made it to the Spanish Border, only to be picked up by the Germans when they shook down a train. Burdick made contact with the Underground as well, but no details are known how he evaded. Sharpe was captured immediately due to the fact he landed directly into the Field Headquarters of a Panzer Unit. He was injured during his landing because his chute did not fully deploy. Lindsey was able to connect with a young boy who was in the French Resistance. Later he was turned over to a man by the name of Henri and his wife Honor who lived in Evreux, France. His wife took care of Andrew Lindsey’s burns on his face and hands and fed him during his painful recuperation time. Later he moved in with Jacques and Magdeleine Mourlet, they lived in the town of Quimper (Normandy). They were active in the Underground movement also. They lived up stairs and a Gestapo Officer lived down stairs. The house only three doors from the Gestapo Headquarters. The Germans never found out. Eventually Lindsey was well enough to travel and he was passed on to another group that got him over the Pyrenees Mountains into Spain, and finally back to England. Lieutenant W.T. Caldwell was posthumously awarded the second highest medal that the U.S.A. bestows upon an individual for heroism in combat, the DISTINGUISHED SERVICE CROSS. 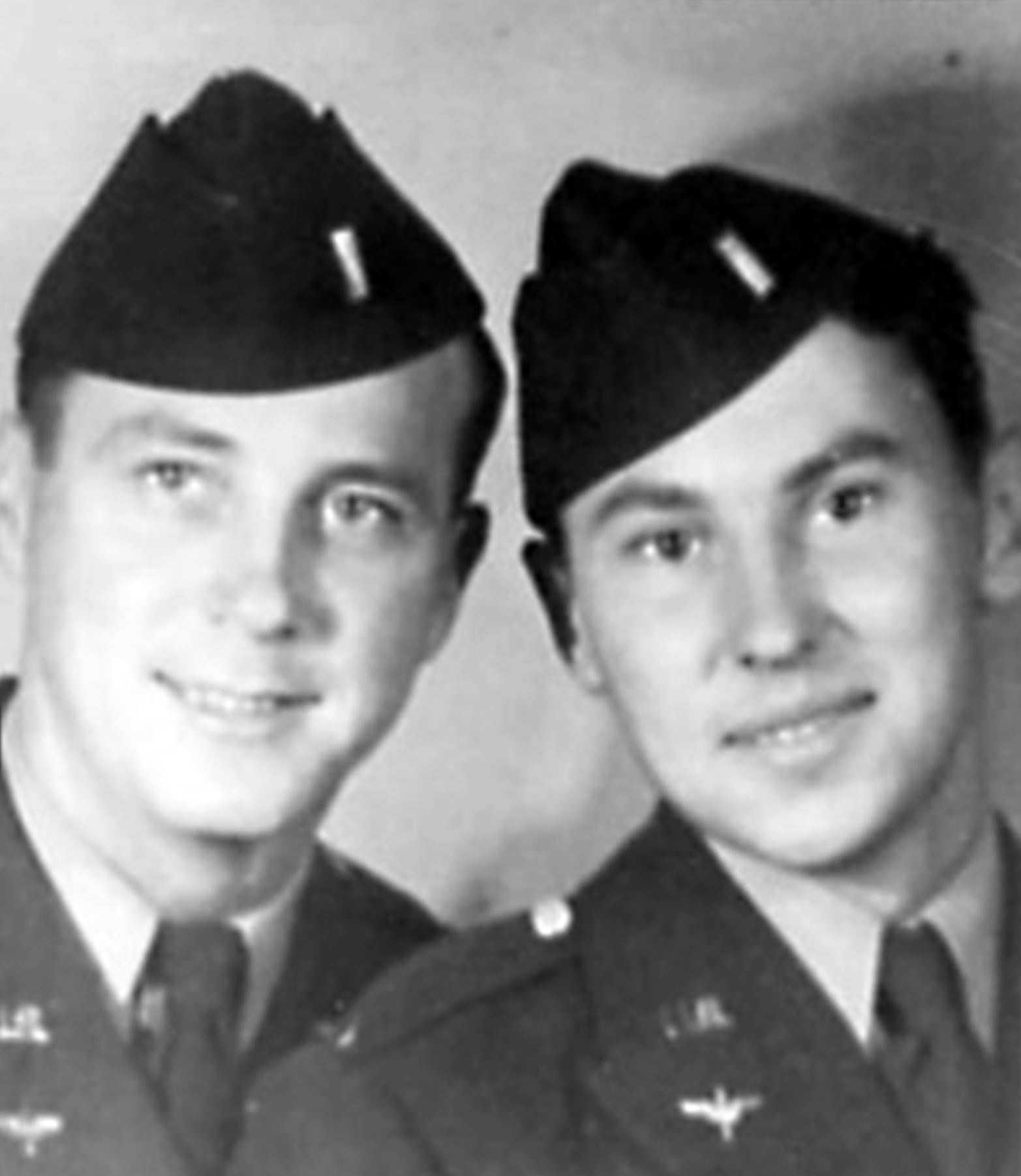 Wilma T. Caldwell, Jr., 2nd Lieutenant Air Corps, United States Army—for exceptionally meritorious heroism while participating in a medium bombardment mission over enemy occupied Europe, 22 August 1943. Shortly after the completion of the bombing run, the airplane piloted by Lieutenant Caldwell was attacked by an enemy fighter, which resulted in an engine being damaged and a fire, which involved the fuel tanks being started in the bomb bay.

Faced with the imminent destruction of his crippled and almost unmanageable plane, subjected to the intense heat of the growing fire, and in spite of radio warnings from other pilots in his formation, Lieutenant Caldwell chose to remain at the controls of his ship, keeping it in a controlled glide in order to give his crew an opportunity to escape. After the forth man had parachuted to safety, the plane exploded in midair. The gallantry displayed by Lieutenant Caldwell in sacrificing his life for his comrades is in keeping with the finest traditions of the United States Army.

A pair of 554th Squadron Pilots, Lieutenants Arthur Lien at left and Wilma Caldwell at right. This photograph was made in a London studio on August 20, 1943. They picked up the photo the following afternoon, then attended the movie "Coney Island" at the Odeon Theater. The very next afternoon one of them would be killed in action and then be posthumously awarded our nation's second highest medal for heroism in combat!

Printed caption on reverse: 'AMERICA'S "RED DEVIL" [a censor has omitted 'Red Devil']FLYERS. USP/2247-9. 2nd Lt. G. Varnet, Rochester, New York, navigator, and 1st Lt. Lutz L. Smehyl, Tampa, Florida, bombardier, while away time at the side of their ship, "Pay Off", during a period when "ops" are off. Both men and officers of flying crews often spend their spare time at their ship, sometimes just "batting the breeze" but more often checking over various of the numerous and intricate mechanisms that go to make up a Marauder. During their first few weeks in Britain, combat crews went through a period of oreintation which included intensive traiing in British communications, vital to the joint operations of the R.A.F. and the U.S.A.A.F. as well as extensive flying over English terrain to acquaint crews with the island's topography and land marks.' Censor no: 285961.

By 22 August 1943, "Pay Off" would be lost with it's temporary crew over France. (Crew of Wilma Caldwell's "Shadrack" flew "Pay Off" that evening as they had a bad supercharger on "Shadrack.") Crew later was 2 KIA, two EE, and two POW.

Printed caption on reverse: 'America's "Red Devil" Flyers. USP/2247-18. Gunners do not leave the maintenance and servicing of the guns entirely to the ground crew. They know that the success of their missions and often their lives may depend on the proper functioning of their equipment when in combat. T/Sgt. John P. Spottiswoode, Radio-gunner from Everett, Mass., (left) and S/Sgt. Joseph R. Pakulski, Engineer-Gunner from Erie, Penn., help load a belt of 50 calibre ammunition into one of the waist guns on their ship "Pay Off", prior to a mission over enemy territory.' Censor no: 285970.

2nd Lt Andrew G. Lindsay, Taken in Evreux, France, while recuperating with the French Underground. Burned as he was bailing out through the open bomb bay doors of "Pay Off," his B-26 for the day (22 Aug 1943). Successfully evaded capture and return to England on or about 6 Feb 1944.