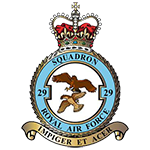 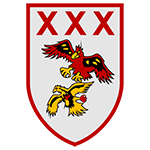 Formed on the same day as No 28, 7 November 1915 and at the same place, Gosport, although unlike its contemporary, it was soon on its way to France, arriving in March 1916. It was designated a fighter squadron from the outset, being equipped with DH2s which it continued to use despite their gradual obsolescence until March 1917, when Nieuport Scouts arrived. Another year later, April 1918 saw their replacement by SE5As, which remained in use when the squadron moved to Germany at the end of war. In August 1919 the squadron returned to the UK and disbanded at Spittlegate on 31 December 1919.

Reforming in what had been and would remain its traditional role on 1 April 1923, it was equipped with Snipes and was based at Duxford. It remained at Duxford for five years having re-equipped with Grebes and Siskins until moving to North Weald where it stayed until 1937, re-equipping with Bulldogs in 1932. However, between October 1935 and September 1936, the squadron's Demons (which had arrived in March 1935) were detached to Egypt during the Abyssinian Crisis.

A year after returning from Egypt, the squadron converted to Blenheim, initially in the day fighter role, and in August 1939, the squadron began re-equip with Hurricanes but the the following month was advised that it would transfer to night defence and converted back to Blenheims, with which it carried out trials with some of the earliest Airborne Interception (AI) radar sets. Beaufighters began to replace the Blenheims in November 1940, the process being complete by February 1941. It continued to be primarily concerned with the night defence of Great Britain, which from May 1943 it conducted with Mosquitos, until May 1944 when it began to carry out night intruder operations until converting to Mosquito XXXs in February 1945. It had only just completed conversion and work up on the new model when the war ended, however, it retained the type and with them joined the post-war air force in the night fighter role.

The squadron's first jets appeared in August 1951, when Meteor NF Mk 11s were received. It also gradually moved north, first to Acklington in 1957, it was here that the squadron's Javelins began to arrive in November 1957 and from February 1958 some Meteor NF Mk 12s were used, probably to assist in the conversion process. Following conversion the squadron continued its migration north, when in July 1958 it moved to Leuchars. In February 1963, the squadron was sent to Cyprus from where in December 1965 it was detached to Zambia during the Rhodesia crisis following UDI.

The squadron returned to the UK in May 1967, this time to Wattisham, where it immediately re-equipped with the Lightning F Mk 3. Having been a fighter unit continuously since 1923, the squadron experienced only its second disbandment on 31 December 1974. However, the following day a new No 29 Squadron came into being at Coningsby, this time equipped with Phantom FGR Mk 2s. This unit had actually begun training as No 29 (Designate) Squadron on 1 October 1974. Phantoms were operated until 1987, with the squadron providing a detachment in the Falkland Islands, until that was redesignated No 23 Squadron in 1983. In 1987, No 29 replaced its Phantoms with the Tornado F Mk 3, still at Coningsby but on 31 October 1998, the squadron disbanded but was revived as the Eurofighter Typhoon Operational Conversion Unit at Coningsby when it formed in October 2003.

This unit was first raised as a reserve squadron, initially equipped with the Royal Aircraft Factory B.E.2c, in November 1915. In early 1916 however No. 29 became the fourth squadron to receive the Airco DH.2 "pusher" fighter, and arrived in France on 25 March 1916[2] – helping to end the Fokker Scourge and establish Allied air superiority in time for the Battle of the Somme.[3]

By late 1916 the DH.2 was outclassed by new German fighters, but No. 29 kept its pushers until March 1917, when it was re-equipped with Nieuport 17s. These were replaced with later Nieuport types, such as the Nieuport 24bis, as these became available. Due to a shortage of the Royal Aircraft Factory S.E.5a the squadron retained its Nieuports until April 1918. At this time the squadron finally received the S.E.5a, which it retained for the rest of the war.[4]

The award of a Victoria Cross – the highest award for valour "in the face of the enemy" in the British Empire – to Captain James McCudden of 29 Squadron was gazetted on 2 April 1918, for McCudden's "conspicuous bravery, exceptional perseverance and a high devotion to duty", between August 1917 and March 1918.[5]

October 1918 was a bitter month for the squadron; four of its members died within a fortnight. Claude Melnot Wilson was the first to fall, on 14 October.[6] Lieutenant Henry Coyle Rath collided with another pilot from the same squadron on the 26th.[7] Even as Rath was succumbing to his injuries, Guy Wareing was shot down on the 27th.[8]

After a short period with the army of occupation in Germany, the Squadron returned to the UK in August 1919 and was disbanded on 31 December 1919.[4] The squadron ended the war having claimed 385 victories. Apart from those already mentioned, the 26 aces who served with the squadron included:

The squadron was reformed on 1 April 1923, initially equipped with Sopwith Snipes. These were replaced by Gloster Grebes in January 1925, In turn, these were replaced by the Armstrong Whitworth Siskin IIIA in March 1928 and Bristol Bulldogs in June 1932.[4] In March 1935, nearly twenty years after it was first raised as a single-seat fighter squadron, the squadron received two-seater Hawker Demons, which it operated until 1938. This included service in Egypt from October 1935 to 1936, during the Abyssinian crisis.[4] As part of the Royal Air Force’s modernisation and expansion in the late 1930s, No. 29 received Bristol Blenheim IF heavy fighters in December 1938.[4]

No 29 began the Second World War with its Blenheims, which at the period operated as day fighters – especially on convoy protection patrols. From June 1940 it became a night fighter squadron, receiving some of the first Beaufighters in November, though it was February 1941 before the squadron was fully equipped with the new fighter.[4] Various marks of the de Havilland Mosquito were flown by the squadron from May 1943 culminating in the Mosquito NF30.[4]

During the immediate post-war years the squadron remained a night/all weather fighter unit. The Mosquitoes continued to serve until replaced by Gloster Meteor NF11s in August 1951.[4] In November 1957 the squadron moved to RAF Acklington in Northumberland where it was re-equipped with Gloster Javelins.[4] In July 1958 to RAF Leuchars in Scotland.[4] In February 1963 No 29 moved to Cyprus and in December 1965 went to Zambia for nine months on detachment during the Rhodesian crisis.[4]

From May 1967 the squadron operated the English Electric Lightning F.3 based at RAF Wattisham near Stowmarket in Suffolk[4] until December 1974 when they re-equipped with the McDonnell F-4 Phantom and moved to RAF Coningsby in Lincolnshire.[4] In May 1982, a detachment of 3 Phantom FGR2’s were deployed at Wideawake airstrip on Ascension Island during the Falklands War. On completion of repairs to the runway at Stanley in August 1982, the squadron deployed 9 aircraft south to the islands, the first arriving on 17 October 1982 flown by the then officer commanding Wing Commander Ian Macfadyen.[9]

In 1987, 29 Squadron was one of the first RAF units to receive the Tornado F3, deploying to Saudi Arabia after the Iraqi invasion of Kuwait in August 1990 and participating in Operation Desert Storm.[10] No. 29 flew the Tornado until disbanding in 1998, as part of the Strategic Defence Review.[4] The squadron was reformed in 2003, this time as the Typhoon operational conversion unit (OCU).[4]