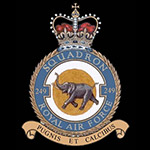 The squadron reformed as a fighter unit on 16 May 1940 at Church Fenton. It was equipped with Spitfires for the first month but these were changed to Hurricanes in June. In August it moved south to Boscombe Down and on the 16th of the month Flight Lieutenant J B Nicholson, one of the flight commanders, became the only Fighter Command pilot to be awarded the Victoria Cross during World War Two, when he continued to attack and destroy a Bf110 despite his aircraft being on fire from which he suffered severe burns.

With the Battle of Britain over, it began offensive operations over France in December from North Weald, to where it had moved in September, and continued these until May 1941, when it moved to Malta. It remained a part of Malta's air defences throughout the Axis onslaught against the island, re-equipping with Spitfires in February 1942. From November of that year it moved over to the offensive, when it began attacks against targets in Sicily. The squadron left Malta for Italy in October 1943 and began operations over the Balkans. Mustangs replaced the Spitfires in September 1944 and in April 1945 it moved to Yugoslavia and then back to northern Italy in May, disbanding at Brindisi on 16 August 1945.

Just over two months later on 23 October 1945, the squadron was reformed when No 500 Squadron at Eastleigh in Kenya was renumbered. Initially equipped with Baltimores, these were replaced by Mosquitoes in March 1946, which it used to conduct survey flights of the region. Once completed the squadron moved Habbaniya in Iraq in June, where it re-equipped with Tempest Vs and VIs in December, at the same becoming a fighter unit. In April 1949, it moved to Egypt receiving Vampires in the following February, remaining there until June 1954, when it moved to Jordan. It operated from Amman for the next two and a half years before moving to Akrotiri in Cyprus in January 1957. In September it re-equipped with Canberras, operating various marks of this aircraft until being disbanded on 24 February 1969.

Initially blockaded by the Axis, Malta was not much of an offensive threat early in the North African Campaign, but was considered an essential Allied stronghold as exemplified by Operation Pedestal and the eventual assignment of Keith Park to defend the island.

On April 20, 1942, the USS Wasp delivered 47 Spitfires to Malta and the German Luftwaffe promptly destroyed 30 of them on the same day. Nonetheless, as these and other aircraft reached the island during the summer of 1942, the defensive and offensive capabilities of AHQ Malta were significantly fortified. On July 1, 1942, AHQ Malta had approximately 200 aircraft, about half of which were Spitfires. Air Vice Marshal Sir Keith Park took over command of AHQ Malta On July 15, 1942.

At this time, the island provided critical operational air bases for the Allies with proximity to Axis shipping lanes and the battlefields of Egypt, Libya, Tunisia, Pantelleria, Sicily, Sardinia, Corsica, and mainland Italy during World War II. There were three main airfields on Malta known as RAF Hal Far, RAF Luqa, and RAF Ta' Kali with an intermediate landing area known as the Safi Dispersal Strip.

During the month of October, 1942 when the Second Battle of El Alamein was being waged, Allied forces were credited with the destruction of 59% of the German tonnage and 45% of the Italian tonnage shipped to Rommel's Axis forces in North Africa. In large part the result of AHQ Malta and the British and American heavy bombers of No. 205 Group, this attrition was a significant aspect of Rommel's defeat.

In February of 1943, AHQ Malta became a major sub-command of the Mediterranean Air Command (MAC) established at the Casablanca Conference in January. The Northwest African Air Forces and Middle East Command were the other major sub-commands of MAC.

When the Allies invaded Sicily (Operation Husky) on July 10, 1943, AHQ Malta consisted of the units indicated below.

Air Vice Marshal R. M. Foster took over command of AHQ Malta on March 26, 1944 and Air Vice Marshal K. B. Lloyd took over on October 19, 1944, commanding through the remainder of World War II and into June of 1947. AHQ Malta had ten other commanders until it was disbanded on June 30, 1968 and its units were absorbed by Air Commander Malta.