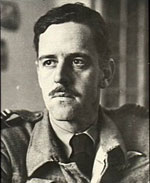 Group Captain Clive Robertson Caldwell DSO, DFC & Bar (28 July 1910 – 5 August 1994) was the leading Australian air ace of World War II. He is officially credited with shooting down 28.5 enemy aircraft in over 300 operational sorties. In addition to his official score, he has been ascribed six probables and 15 damaged. Caldwell flew Curtiss P-40 Tomahawks and Kittyhawks in the North African Campaign and Supermarine Spitfires in the South West Pacific Theatre. He was the highest-scoring P-40 pilot from any air force and the highest-scoring Allied pilot in North Africa.

Caldwell was born in Lewisham, Sydney and educated at Albion Park School, Sydney Grammar School and Trinity Grammar School. He learned to fly in 1938 with the Aero Club of New South Wales. When World War II broke out, he joined the Royal Australian Air Force (RAAF), with the intention of becoming a fighter pilot. As he was over the age limit for fighter training, Caldwell persuaded a pharmacist friend to alter the details on his birth certificate. He was accepted by the RAAF and joined the Empire Air Training Scheme (EATS; also known as the British Commonwealth Air Training Plan and similar names).

Caldwell's first, brief combat posting was a British Hurricane unit, No. 73 Squadron, Royal Air Force, in the early stages of the North African campaign. He had gained only a few operational hours when he was transferred to No. 250 Squadron RAF as it converted to the new P-40 Tomahawk, one of the first units in the world to operate P-40s. According to some accounts, Caldwell—as Flying Officer Jack Hamlyn's wingman—was involved in the P-40's first ever kill, of an Italian CANT Z.1007 bomber, over Egypt on 6 June 1941. However, the claim was not officially recognised. (Hamlyn and Sergeant Tom Paxton scored the first official kill two days later, another CANT.) Soon afterwards, Caldwell served with the squadron over Syria and Lebanon.

After he struggled to acquire the skill of gunnery deflection, Caldwell developed a training technique, known as 'shadow shooting', in which he fired at the shadow of his own aircraft on the desert surface. This was later widely adopted by the Desert Air Force.

The squadron returned to North Africa. On 25 June 1941, escorting bombers attacking Gazala, Libya, Caldwell destroyed an aircraft in air-to-air combat for the first time, during his 30th sortie. He downed a German Messerschmitt Bf 109E, piloted by Leutnant Heinz Schmidt of Jagdgeschwader 27, over Capuzzo.

On 4 July 1941, Caldwell saw a German pilot shoot and kill a close friend, Pilot Officer Donald Munro, who was descending to the ground in a parachute. This was a controversial practice, but was nevertheless common among some German and Allied pilots. One biographer, Kristin Alexander, suggests that it may have caused Caldwell's attitude to harden significantly. Months later, press officers and journalists popularised Caldwell's nickname of 'Killer', which he disliked. One reason for the nickname was that he too shot enemy airmen after they parachuted out of aircraft. Caldwell commented many years later: '...there was no blood lust or anything about it like that. It was just a matter of not wanting them back to have another go at us. I never shot any who landed where they could be taken prisoner.' (In later life, Caldwell said that his thoughts often turned to one Japanese airman or passenger, who survived Caldwell's last aerial victory but could not be rescued.) A more commonly-cited reason for the nickname was his habit of using up ammunition left over at the end of sorties, to shoot up enemy troops and vehicles. During his war service, Caldwell wrote in a notebook: 'it's your life or theirs. This is war.'

While flying to his base alone, over north west Egypt on 29 August 1941, Caldwell was attacked by two Bf 109s, in a deadly simultaneous approach at right angles. His attackers included one of Germany's most famous Experte (aces), Leutnant Werner Schröer of Jagdgeschwader 27 (JG 27), in a Bf 109E-7. Caldwell sustained three separate wounds from ammunition fragments and/or shrapnel; his Tomahawk was hit by more than 100 7.9 mm bullets and five 20 mm cannon shells, but he shot down Schröer's wingman, and heavily damaged Schröer's 'Black 8', causing Schröer to disengage. On 23 November, Caldwell shot down an Experte, Hauptmann Wolfgang Lippert, commander of Staffel II./JG 27, who bailed out and struck the tailplane. Lippert was captured and had his legs amputated. Ten days later a gangrene infection set in, and he died on 3 December 1941. For this action Caldwell was awarded the Distinguished Flying Cross. Caldwell claimed five Junkers Ju 87 (Stuka) dive bombers in a matter of minutes on 5 December. For this he was awarded a Bar to his DFC.

His report of that action reads:

I received radio warning that a large enemy formation was approaching from the North-West. No. 250 Squadron went into line astern behind me and as No. 112 Squadron engaged the escorting enemy fighters we attacked the Ju's from the rear quarter. At 300 yards I opened fire with all my guns at the leader of one of the rear sections of three, allowing too little deflection, and hit No. 2 and No. 3, one of which burst into flames immediately, the other going down smoking and went into flames after losing about 1000 feet. I then attacked the leader of the rear section...from below and behind, opening fire with all guns at very close range. The enemy aircraft turned over and dived steeply... opened fire at another Ju 87 again at close range, the enemy caught fire...and crashed in flames. I was able to pull up under the belly of one of the rear, holding the burst until very close range. The enemy... caught fire and dived into the ground.

The citations for both the original DFC and the Bar were published in the same issue of the London Gazette, a supplement to that of 23 December 1944, dated 26 December 1944, they read: Air Ministry, 26th December, 1941.

This officer has performed splendid work in the Middle East operations. He has at all times shown dogged determination and high devotion to duty which have proved an inspiration to his fellow pilots. On one occasion, during a patrol, he was attacked by 2 Messerschmitt 109's. His aircraft was badly damaged, while he himself received wounds on his face, arms and legs. Nevertheless, he courageously returned to the attack and shot down one of the hostile aircraft. Flight Lieutenant Caldwell has destroyed at least 4 enemy aircraft.

On 24 December, Caldwell was involved in an engagement which mortally wounded another Luftwaffe ace, Hpt. Erbo Graf von Kageneck (69 kills) of III./JG 27. Caldwell only claimed a 'damaged' at the time, but postwar sources have attributed him with the kill.

In January 1942, Caldwell was promoted to Squadron Leader and was given command of No. 112 Squadron RAF, becoming the first EATS graduate to command a British squadron. 112 Sqn at that time included a number of Polish aviators, and this was why Caldwell was later awarded the Polish Krzyż Walecznych (KW; 'Cross of Valour').

Caldwell scored another striking victory in February 1942, while leading a formation of 11 Kittyhawks from 112 Sqn and 3 Sqn. Over Gazala, he sighted a schwarm of Bf 109Fs flying some 2,000 ft higher. Caldwell immediately nosed into a shallow dive, applied maximum power and boost, then pulled his Kittyhawk up into a vertical climb. With his P-40 'hanging from its propeller,' he fired a burst at a 109 flown by Leutnant Hans-Arnold Stahlschmidt of I./JG27, who was lagging behind the others. Stahlschmidt's fighter 'shuddered like a carpet being whacked with a beater' before spinning out of control. Although the Kittyhawk pilots thought that the 109 had crashed inside Allied lines, Stahlschmidt was able to crash-land in friendly territory.

When Caldwell left the theatre later that year, the commander of air operations in North Africa and the Middle East, Air Vice Marshal Arthur Tedder described him as: 'an excellent leader and a first class shot'. Caldwell claimed 22 victories while in North Africa flying P-40s, including ten Bf 109s and two Macchi C.202s.

During 1942, Australia came under increasing pressure from Japanese forces, and Caldwell was recalled by the RAAF to take command of No. 1 (Fighter) Wing, comprising No. 54 Squadron RAF, No. 452 Squadron RAAF and No. 457 Squadron RAAF. The wing was equipped with the Supermarine Spitfire and in early 1943 was posted to Darwin, to defend it against Japanese air raids.

Caldwell claimed two kills in his first interception sortie over Darwin, a Mitsubishi A6M Zero (also known by the Allied codename 'Zeke') fighter and a Nakajima B5N 'Kate' light bomber. The Spitfire pilots found Japanese fighter pilots reluctant to engage Allied fighters over Australia, due to the distance from their bases in the Dutch East Indies. The wing initially suffered high losses, due to the inexperience of many of its pilots, and teething mechanical problems with their newly-'tropicalised' Mark VC Spitfires. This was viewed with concern by high commanders, to such extent that the Allied air commander in the South West Pacific, Major General George Kenney, considered sending the wing to the New Guinea campaign, and returning U.S. Fifth Air Force fighter units to Darwin.

Caldwell scored what was to be his last aerial victory, a Mitsubishi Ki-46 'Dinah', over the Arafura Sea on 17 August 1943. He claimed a total of 6.5 Japanese aircraft shot down.

Later in 1943, Caldwell was posted to Mildura, to command No. 2 Operational Training Unit (2OTU). He was awarded the Distinguished Service Order (DSO) in November 1943. By 1944, with the Japanese forces retreating north, Caldwell was again posted to Darwin, this time commanding No. 80 (Fighter) Wing, equipped with the Spitfire Mark VIII.

In April 1945, while serving at Morotai in the Dutch East Indies with the Australian First Tactical Air Force, as Officer Commanding No. 80 Wing, Caldwell played a leading part in the 'Morotai Mutiny', in which several senior flyers resigned in protest at what they saw as the relegation of RAAF fighter squadrons to dangerous and strategically worthless ground attack missions. An investigation resulted in three senior officers being relieved of their commands, with Caldwell and the other 'mutineers' cleared.

Prior to the 'mutiny', Caldwell had been charged over his involvement in an alcohol racket on Morotai, where liquor was flown in by RAAF aircraft and then sold to the sizable U.S. forces contingent in the locality. He was court martialled in January 1946 and reduced to the rank of Flight Lieutenant. Caldwell left the service in February.

After the war, Caldwell was involved as a purchasing agent obtaining surplus aircraft and other military equipment from the U.S. Foreign Liquidation Commission in the Philippines. The aircraft and equipment were exported to Australia in 1946. After the successful conclusion of this venture, Caldwell joined a cloth import/export company in Sydney and shortly after became its managing director. He became a partner in 1953 and later served as chairman of the board. The firm, Clive Caldwell (Sales) Pty Ltd, achieved considerable success under Caldwell's direction and expanded through subsidiaries worldwide.

Although in later life Caldwell rarely spoke of his wartime service, upon his death in Sydney on 5 August 1994, Australians 'mourned the passing of a true national hero'.

This webpage was updated 8th January 2017