Constituted as 387th Bombardment Group (Medium) on 25 Nov 1942. Activated on 1 Dec 1942. Trained with B-26 aircraft. Moved to England in Jun 1943. Served with Eighth AF until assigned to Ninth in Oct 1943. Began combat in Aug 1943 and concentrated its attacks on airdromes during the first months of operations. Made numerous strikes on V-weapon sites in France in the winter of 1943-1944. Hit airfields at Leeuwarden and Venlo during Big Week, 20-25 Feb 1944, the intensive campaign against the German Air Force and aircraft industry. Helped to prepare for the invasion of Normandy by attacking coastal batteries and bridges in France during May 1944. Bombed along the invasion coast on 6 Jun 1944 and supported ground forces throughout the month by raiding railroads, bridges, road junctions, defended areas, and fuel dumps. Moved to the Continent in Jul 1944 and participated in attacks on the enemy at St Lo in the latter part of the month and on German forces at Brest during Aug and Sep. Extended operations into Germany by fall of 1944. Received a DUC for action during the Battle of the Bulge when the group hit strongly defended transportation and communications targets at Mayen and Prum. Supported the Allied drive into the Reich by attacking bridges, communications centers, marshalling yards, storage installations, and other objectives. Ended combat operations in Apr 1945. Returned to the US in Nov. Inactivated on 17 Nov 1945. 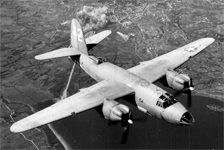 This webpage was updated 20th August 2012

Please help me to improve these articles with any addition information
or if you should encounter any broken links or Web page errors :-(