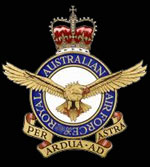 Avro Anson I, A4-19. Forty-eight aircraft of this type were ordered by the RAAF for general reconnaissance and bombing duties. (Australian War Memorial).

A trio of Anson I's in flight over Australia prior to Japan's entry into the war. (Australian War Memorial).

Anson I diverted from RAF contracts and retaining its British serial number, R3337. This No. 13 Squadron's aircraft is seen in flight over Cootamundra, N.S.W., in 1940.

Photographed at Laverton, Victoria, in 1944 this Anson I was operated by No. 1 A.P.U. (Aircraft Performance Unit).

Line-up of Anson I's operated in 1945 for reconnaissance and anti-submarine patrol from Laverton, Victoria, by No. 67 Squadron.

The Royal Australian Air Force During the Pacific War

On the eve of the Japanese seven-point assault against Allied forces in Hawaii, Wake Island, Guam, the Philippines, Hong Kong, Thailand and Malaya, the Royal Australian Air Force had on strength 536 combat aircraft distributed as follows:
Malaya/Singapore
28 Buffaloes, 24 Hudsons, 1 Beaufort
Australia — Front-line units
101 Wirraways, 53 Hudsons, 11 Seagulls, 12 Catalinas
Australia — Reserve units
72 Battles, 108 Wirraways, 126 Ansons
of which the only fighter aircraft were the twenty-eight obsolescent Buffaloes of Nos. 21 and 453 Squadrons.
In spite of combat losses and other attritions the RAAF slowly increased its strength by absorbing aircraft belonging to Allied units retreating from Southeast Asia, by impressing Australian civilian light aircraft and transports and by taking delivery of domestically produced aircraft. However, the main sources of aircraft operated by the RAAF during the Pacific War were the American and, to a lesser extent, British aircraft industries. As a result of this steady flow of aircraft Australia ended the war with the fourth largest Allied Air Force—after the United States, the USSR and the United Kingdom.