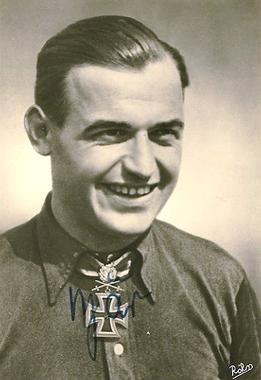 Heinz Bär learned to fly gliders as a teenager. After the Hitler and the National Socialists came to power, Bär entered the German's clandestine pilot training program that would soon provide pilots for the airline Lufthansa and the air arm Luftwaffe. Bär enlisted in the Luftwaffe and following advanced training was accepted as an Non-Commissioned Officer Pilot.

As World War II began in Europe, Heinz Bär held the rank of Unteroffizer (or Corporal) with the 1. Staffel, I Gruppe of Jagdgeschwader 51 which flew the Messerschmitt Bf 109E fighters. Feldwebel (or Technical Sergeant) Bär downed his first enemy aircraft, an American-made French Armee de L' Air Curtiss Hawk 75A fighter over Weissenberg, Germany on September 25, 1939. During the Battle of Britain, he was the Luftwaffe's top scoring NCO pilot with a total of 17 kills during that period. He had acquired 27 aerial victories by July 2, 1941 and was commissioned a Leutnant (or 2nd Lieutenant) plus awarded the Ritterkreuz (or Knight's Cross).

Leutnant Bär became the Gruppenkommandeur of IV/JG 51 as the unit transferred to the East on July 27, 1941 attached to JG 53 'Pik As', to join the invasion of the Soviet Union. Lt. Bär flew the Bf 109F during this period.

Oberleutant (1st Lieutenant) Bär was awarded the Eichenlaub (or Oak Leaves) to his Ritterkreuz following his 56th victory on August 14, 1941. On November 24, 1941, after the death of Kommodore Werner Mölders, JG 51 became the 'Mölders' Geschwader. On February 16, 1942, Bär was awarded the Schwertern (or Swords) to his Ritterkreuz mit Eichenlaub plus he was promoted to Hauptmann (or Captain) after his 90th aerial victory.

Hauptmann Bär transferred to the Mediterranean Front to become the Gruppenkommandeur of I/JG 77 'Herzas' on May 1, 1942. He flew the Bf 109F and later the Bf 109G models. The strain of constant battle and knowledge of inevitable defeat of Axis forces in the Mediterranean later caused the stressed-out Bär to be relieved from command back to Germany in disgrace.

Following his recuperation, Hauptmann Bär was soon assigned to Reich's Defense duties with II/JG 1 'Oesau' to fly the heavily armed Focke-Wulf Fw 190A fighter as the Allied bombing campaign gathered momentum. He was eventually promoted to the rank of Major and the position of Gruppenkommandeur of II/JG 1. Bär gained his 200th aerial victory on April 22, 1944. On the sortie in which he downed his 200th aerial victory, Major Bär did not fly one of his own assigned Fw 190As but flew the now famous Fw 190A-7 'Red 23'. Bär would be credited with 21 heavy bombers to his Defense of the Reich tally by the end of the war.

In June 1944, Bär was promoted to Oberstleutnant (or Lieutenant Colonel) and transferred again to assume the position of Geschwaderkommodore of JG 3 'Udet'.

In January 1945, Bär became the Kommandeur of Ergänzungs-Jagdgeschwader 2, an advanced training unit for the Messerschmitt Me 262A jet pilots at Lechfeld, Germany. III/EJG 2 was soon transformed into an operational fighter unit. Bär downed 13 enemy bombers and fighters while he served with III/EJG 2. On April 23, 1945, Bär joined Generalleutnant (or Major General) Adolf Galland's Jagdverband 44, the so-called 'Squadron of Aces' or 'Squadron of Outcasts', for the last days of the war in Europe. When Galland was wounded, Bär took over command of the unit on April 26, 1945. With JV 44, he flew the prototype Me 262A-1a/U1 extra heavily armed with six cannon including two 20mm MG 151s, two 30mm MK 103s and two 30mm MK 108s. He downed his last three victories, all Republic P-47 Thunderbolts, with JV 44. Bär ended the war with the rank of Oberst (or full Colonel).

Postwar, Heinz Bär would eventually become an aviation consultant. In 1957, while performing aerobatics in a light plane on the anniversary date of his 200th aerial victory, Heinz Bär was killed instantly when he suddenly spun in from a low altitude.

REMARKS: Heinz Bär is the 8th ranking air 'Ace' of all time. He fought on every German front throughout the entire duration of World War II in Europe and Africa. His 16 aerial victories acquired while he flew the Me 262A place him as the 2nd ranking jet ace of WWII - Oberleutnant Kurt Welter downed 20+ enemy aircraft while he flew the Arado Ar 234B-2n, Me 262A-1a and Me 262B-1a nightfighters with 'Kommando Welter' and 10./Nachtjagdgeschwader 11. While fighting on every front and flying just about every type of German fighter, Heinz Bär was shot down 18 times and wounded on many occasions.

NOTE: Almost all of Heinz Bär's assigned combat aircraft were numbered 'Lucky 13', as his own preference regardless of his position within a respective unit.