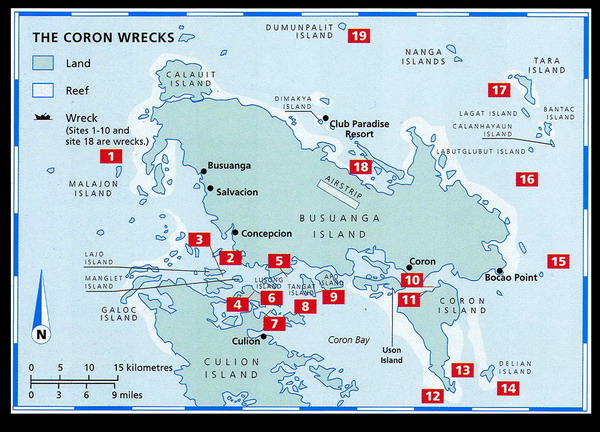 Palawan is one of the Philippines' last frontiers - still relatively undeveloped, it offers spectacular landscapes, world-class diving and a wildlife that has more in common with nearby Borneo than that of the other Philippine islands. Borneo and Palawan would have been connected by a land bridge during the last Ice Age.

Busuanga is the largest island in the Calamian Group, covering some 900 square miles. The island is home to a game reserve and wildlife sanctuary, as well as being the pathway to some truly outstanding dive sites. Fishing, farming and cottage industries are the main activ¬ities of the islanders although the improvement of travel links to the island is now showing results and Busuanga is gradually receiving tourists.

The World War II wrecks around Busuanga Island, particularly in Coron Bay, have been one of Philippine diving's best-kept secrets. Here is a condensed version of Truk Lagoon in the Caroline Islands, Micronesia - a legendary (and, unfortunately, expensive) destination among divers for its large concentration of World War II Japanese wrecks. Admittedly the Coron sites are not easy to get to and accommodation is limited, but the area is rewarding to visit and prices are reasonable. The visibility is not brilliant, but the wrecks are not that deep and the currents not that strong, though it is always best to choose neap tides and, if possible, slack water.

Twelve wrecks have so far been located in diveable depths, though those nearest to the Busuanga mainland suffer from poor visibility due to water runoff and plankton bloom. Most of the wrecks are long day trips from Coron Town, and some are best treated as an overnight trip, so you are not likely to dive here in really bad weather, though you can dive quite happily in heavy rain. The deeper wrecks have many fishing nets caught on them, so approach these with care.

Early research on some of these vessels was done by wreck expert Brian Homan. More recently, in 1993-4, Peter Heimstaedt and Mike Rohringer from Germany did exten-sive research both on the wrecks themselves and in Japan, through the Military History Department of the Japanese National Institute for Defence Studies in Tokyo. Heimstaedt, a former officer in the Federal German Navy, is currently writing up this research.

The scenery of Coron Island's limestone cliffs and tiny isolated beach coves is spectacular, as is that around its freshwater lakes. The diving is not confined exclusively to the wrecks, though these are the reason most divers would come here. Due mainly to typhoon damage, the coral is not that spectacular, but there is some perfect snorkelling to be had where it is good. Areas near to seven pearl farms, a fish farm and lobster farm are patrolled by armed security guards against illegal fishing.

One of the freshwater lakes contains a hot spring and is only a short climb over limestone pinnacles from the sea. In it you find creatures of both salt and fresh water, plus a lone habituated barracuda nearly 1m (40in) long; as you go deep-er, the water gets hotter. There is also a delightful hidden cavern to explore, with an underwater entrance to the sea.

The diving is best from October to May. All access details given in the following site descriptions are from Coron Town.

ORIGIN OF THE CORON WRECKS

In 1944 US Admiral'Bull' Halsey had the task of checking out the Japanese fire-power in preparation for the US landing on Leyte. To find safe passage for an air-craft carrier, he sent reconnaissance air-craft to photograph the Linapacan Strait and the Calamian group of islands. This resulted in a mapping officer noticing that some of the islands were moving about - a camouflaged Japanese fleet had been found. At 0900 hours on 24 September 1944 Task Force 45 carrier-based bombers attacked and sank 24 vessels around Busuanga and Coren Islands.

One of the few true warships among the Coron wrecks (the others were mostly auxiliary vessels), the Akitsushima, sunk on 24 September 1944 by US aircraft, was a flying boat tender. The wreck (148m [487ft] long, 4650 gross tons) lies on its port side pointing 2900 (com-pass bearing) in 38m (125ft) of water, with the starboard side hullat 20m (65ft). The arm of the stern crane used to load and unload the flying boat lies broken to port in 34m (112ft). The main deck is split between this crane and the funnel. There is no sign of the flying boat.

This is an advanced dive due to the depth, The ship can be penetrated with care, but is also good for fish life. Large groupers lurk in the hull and shoals of barracuda, tuna and snapper are found along it.

The Akitsushima (秋津洲?) was a flying boat tender of the Imperial Japanese Navy, serving during the World War II.

* These plans were not able to pass the assessment by the Ministry of Finance. The IJN wanted a 3,500 tons class flying boat tender. This is basic plan of the Akitsushima.
* The 3,500 tons flying boat tender was scaled-up model of the 2,400 tons class. Her duties were maintenance, repair and supplies to the flying boat in atoll.
* The IJN intended to accommodate the flying boat by bow-up trim and slope at first, however this plan was canceled and Akitsushima equipped 35 tons crane. The IJN rewrote her drawings many times, and her displacement increased by 1000 tons in the detailed design.

June 1942: At Rabaul throughout. Bombed five times during this month but sustained no damage.

October 1942: Same as above. Sustained four more air attacks, but no damage.
November 1942: Remained attached to Base Air Force, 11th Air Fleet. Circulating between Rabaul and Kavieng. Under bombing twice, but no damage received.

3 December 1942: Captain Mayazumi relieved by Captain Takao Yoshimi. [Note: Given her departure the next day, it is possible that Captain Takao did not board the ship till arrival at Yokosuka.].

23 January 1943: At 1645 in position 15 miles southwest of Kavieng, escorting destroyer HAKAZE detects a submarine and charges, only to be torpedoed in the starboard side by USS GUARDFISH (SS-217), jacknife, and sink. Quick rescue work by AKITSUSHIMA saves DD CO LtCdr. Mashinori Kashima and most of the crew, but 13 are lost.

17 February 1944: Air-raided at Truk by TF 58.
0620: Two 1,000 pound bombs dropped by planes from USS ENTERPRISE strike the ship; one forward of the bridge, the other on the very end of the fantail, damaging the plane crane.

18 September 1944: Approaching Manila, SAIGON MARU is torpedoed and sunk at 1044 in position 14-20'N, 120-50'E. She blew up and sank, and Akitsushima proceeded to Manila, followed by YUZUKI and UZUKI after they counter-attacked and conducted rescue attempts.

21 September 1944: Air-raid Manila by TF 38. No damage; ordered that afternoon to depart same day for Coron Bay.
22 September 1944: Arrived at Coron Bay from Manila and anchored in the narrow passage between Lajo Island and Manglet Island.

24 September 1944: Air-raided at Coron: attacked by more than thirty planes from U.S. TF 38, and suffered two direct bomb hits at 0905. One of these was a large bomb hit on the stern catapult track. This set off an enormous explosion, fueld by av-gas fires, that completely blew out the shell on the port quarter, and the stern was kept from breaking loose only by the keel and plates on the starboard side.

27 September 1944: Survivors of Akitsushima including Captain Fujimaki landed at Manila by Minesweeper # 41 and transport T-102 and were accomodated by Special Base Force # 31.

Send Mail
Please help us to improve these articles with any additional information or photo's.
If you should encounter any bugs  broken links, or display errors just email us.

This webpage was updated 1st May 2020