Constituted as 386th Bombardment Group (Medium) on 25 Nov 1942. Activated on 1 Dec 1942. Equipped with B-26's. Moved to England, arriving in Jun 1943. Operated with Eighth AF until assigned to Ninth in Oct 1943. Flew first mission in Jul 1943. Concentrated on airdromes but also bombed marshalling yards and gun positions during the first months of combat. Carried out an extensive campaign against V-weapon sites along the coast of France in the winter of 1943-1944, and bombed airfields in Holland and Belgium during Big Week, 20-25 Feb 1944. Hammered marshalling yards, gun positions, and airdromes preceding the invasion of Normandy and made numerous assaults on bridges of the Seine late in May. Struck coastal batteries on D-Day and hit bridges, supply and fuel stores, gun positions, and defended areas during the remainder of the Normandy campaign. Supported Allied forces at Caen, and participated in the massive blows against the enemy at St Lo on 25 Jul 1944. Knocked out targets to help clear the Falaise gap of German forces in Aug 1944 and hit strong points at Brest during Sep. After moving to the Continent in Oct 1944, attacked strong points at Metz, flew missions to Holland and assaulted such objectives as defended areas, storage depots, and communications in Germany. Focused its attacks primarily on bridges during the Battle of the Bulge, Dec 1944-Jan 1945, in order to cut off enemy supplies and reinforcements. Converted to A-26's shortly after the Ardennes campaign and continued to strike German communications, transportation, and storage facilities until May 1945. Redesignated 386th Bombardment Group (Light) in Jun 1945. Returned to the US, Jul-Aug. Inactivated on 7 Nov 1945. 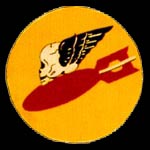 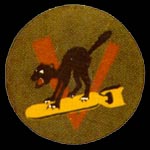 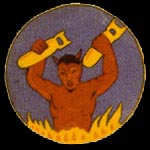 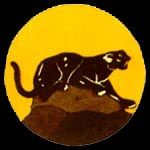 This webpage was updated 9th July 2018