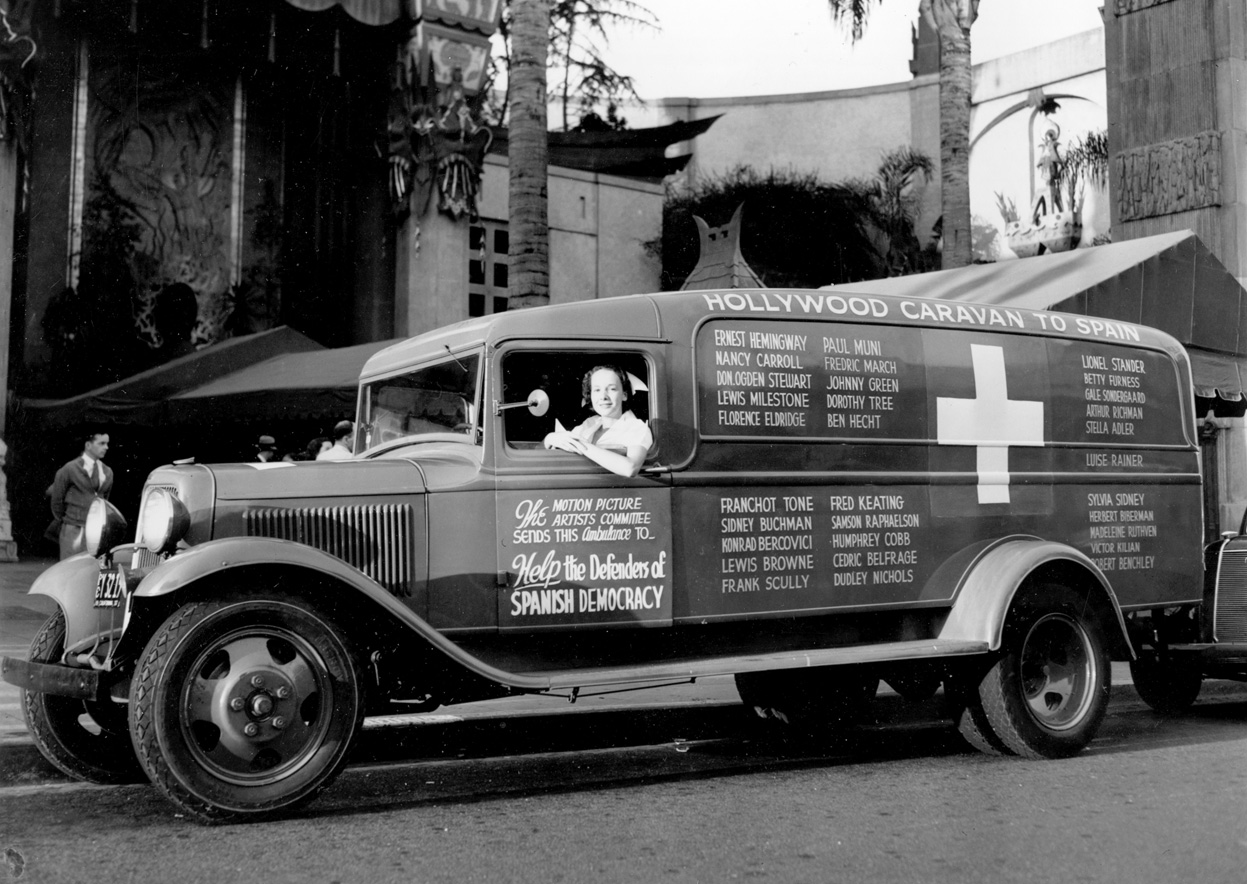 In the early days of the war, over 50,000 people who were caught on the wrong side of the lines were assassinated or executed. In these paseos ( strolls ), as the executions were called, the victims were taken from their refuges or jails by armed people to be shot outside of town. The corpses were abandoned or interred in graves dug by the victims themselves. Local police just noted the appearance of the corpses. Probably the most famous such victim was the poet and dramatist Federico Garcia Lorca. The outbreak of the war provided an excuse for settling accounts and resolving long-standing feuds. Thus, this practice became widespread during the war in conquered areas.

Any hope of a quick ending to the war was dashed on 21 July, the fifth day of the rebellion, when the Nationalists captured the main Spanish naval base at Ferrol in northwestern Spain. This encouraged the Fascist nations of Europe to help Franco, who had already contacted the governments of Nazi Germany and Fascist Italy the day before. On July 26, the future Axis Powers cast their lot with the Nationalists. A rebel force under Colonel Beorlegui Canet, sent by General Emilio Mola, advanced on Guipuzcoa. On September 5th, after heavy fighting it took Irun closing the French border to the Republicans. On September 13th the Basques surrendered San Sebastian to the Nationalists who then advanced toward their capital, Bilbao but were halted by the Republican militias on the border of Viscaya at the end of September. The capture of Guipuzcoa had isolated the Republican provinces in the north.

To the south, Nationalist forces under Franco won another victory on 27 September when they relieved the Alcazar at Toledo. A Nationalist garrison under Colonel Moscardo had held the Alcazar in the center of the city since the beginning of the rebellion, resisting for months against thousands of Republican troops who completely surrounded the isolated building. The inability to take the Alcazar was a serious blow to the prestige of the Republic, as it was considered inexplicable in view of their overwhelming numerical superiority in the area. Two days after relieving the siege, Franco proclaimed himself Generalisimo and Caudillo ( chieftain ) while forcibly unifying the various and diverse Falangist, Royalist and other elements within the Nationalist cause.

In October, the Francoist troops launched a major offensive toward Madrid, reaching it in early November and launching a major assault on the city on 8 November. The Republican government was forced to shift from Madrid to Valencia, out of the combat zone, on 6 November. However, the Nationalists attack on the capital was repulsed in fierce fighting between November 8 and 23. A contributory factor in the successful Republican defense was the arrival of the International Brigades, though only around 3000 of them participated in the battle. Having failed to take the capital, Franco bombarded it from the air and, in the following two years, mounted several offensives to try to encircle Madrid. (See also Siege of Madrid (1936-39))

On 18 November, Germany and Italy officially recognized the Franco regime, and on 23 December, Italy sent volunteers of its own to fight for the Nationalists.

With his ranks being swelled by Italian troops and Spanish colonial soldiers from Morocco, Franco made another attempt to capture Madrid in January and February 1937, but failed again.

On 21 February the League of Nations Non-Intervention Committee ban on foreign national volunteers went into effect. The large city of Malaga was taken on 8 February. On 7 March German Condor Legion equipped with Heinkel He 51 biplanes arrived in Spain; on 26 April the Legion was responsible for the infamous massacre of hundreds, including numerous women and children, at Guernica in the Basque Country; the event was committed to notoriety by Picasso. Two days later, Francos army overran the town.

After the fall of Guernica, the Republican government began to fight back with increasing effectiveness. In July, they made a move to recapture Segovia, forcing Franco to pull troops away from the Madrid front to halt their advance. Mola, Francos second-in-command, was killed on June 3, and in early July, despite the fall of Bilbao in June, the government actually launched a strong counter-offensive in the Madrid area, which the Nationalists repulsed with some difficulty. The clash was called Battle of Brunete (Brunete is a town in the province of Madrid).

After that, Franco regained the initiative, invading Aragon in August and then taking the city of Santander. With the surrender of the Republican army in the Basque territory and after two months of bitter fighting in Asturias (Gijon finally fell in late October) the war was effectively ended in the north front with a Francoist victory.

Meanwhile, on August 28, the Vatican recognized Franco, and at the end of November, with Francos troops closing in on Valencia, the government had to move again, this time to Barcelona.

The Battle of Teruel was an important confrontation between Nationalist and Republican troops. The city belonged to the Nationalists at the beginning of the battle, but remarkably, the Republicans conquered it in January. The Francoist troops launched an offensive and recovered the city by 22 February. However, in order to do so, Franco had to rely heavily on German and Italian air support and subsequently repaid them with extensive mining rights. On March 7, the Nationalists launched the Aragon Offensive. By April 14, they had pushed through to the Mediterranean Sea, cutting the Republican government-held portion of Spain in two. The Republican government tried to sue for peace in May but Franco demanded unconditional surrender, and the war raged on. The Nationalist army pressed southward from Teruel and along the coast toward the capital of the Republic at Valencia but was halted in heavy fighting along the fortified XYZ Line.

The Republican government then launched an all-out campaign to reconnect their territory in the Battle of the Ebro, beginning on July 24 and lasting until November 26. The campaign was militarily unsuccessful, and was undermined by the Franco-British appeasement of Hitler in Munich with the concession of Czechoslovakia. This effectively destroyed the last vestiges of Republican morale by ending all hope of an anti-fascist alliance with the Western powers. The retreat from the Ebro all but determined the final outcome of the war. Eight days before the new year, Franco struck back by throwing massive forces into an invasion of Catalonia.

Francos troops conquered Catalonia in a whirlwind campaign during the first two months of 1939. Tarragona fell on 14 January, followed by Barcelona on 26 January and Girona on 5 February. Five days after the fall of Girona, the last resistance in Catalonia was broken.

On 27 February, the governments of the United Kingdom and France recognized the Franco regime.

Only Madrid and a few other strongholds remained for the Republican government forces. Then, on 28 March, with the help of pro-Franco forces inside the city (not as effective as described by General Mola in his propagandistic broadcasts of 1936 referring to the so-called fifth column ), Madrid fell to the Nationalists. The next day, Valencia, which had held out under their guns for close to two years, also surrendered. Franco proclaimed victory in a radio speech aired on 1 April, when the last of the Republican forces surrendered.

After the end of the War, there were harsh reprisals against Francos former enemies, when thousands of Republicans were imprisoned and at least 30,000 executed. Others have calculated these deaths at from 50,000 to 200,000. Many others were put to forced labour, building railways, drying out swamps, digging canals (La Corchuela, the Canal of the Bajo Guadalquivir), construction of the Valle de los Caidos monument, etc. Hundreds of thousands of other Republicans fled abroad, especially to France and Mexico. Some 500,000 of them fled to France.

On the other side of the Pyrenees, refugees were confined in internment camps of the French Third Republic, such as Camp Gurs or Camp Vernet, where 12,000 Republicans were housed in squalid conditions (mostly soldiers from the Durruti Division). The 17,000 refugees housed in Gurs were divided into four categories (Brigadists, pilots, Gudaris and ordinary Spaniards). The Gudaris (Basques) and the pilots easily found local backers and jobs, and were allowed to quit the camp, but the farmers and ordinary people, who could not find relations in France, were encouraged by the Third Republic, in agreement with the Francoist government, to return to Spain. The great majority did so and were turned over to the Francoist authorities in Irun. From there they were transferred to the Miranda de Ebro camp for purification according to the Law of Political Responsibilities.

After the proclamation by Marshall Petain of the Vichy regime, the refugees became political prisoners, and the French police attempted to round-up those who had been liberated from the camp. Along with other undesirables, they were sent to the Drancy internment camp before being deported to Nazi Germany. About 5,000 Spaniards thus died in Mauthausen concentration camp. The Chilean poet Pablo Neruda, who had been named by the Chilean President Pedro Aguirre Cerda special consul for immigration in Paris, was given responsibility for what he called the noblest mission I have ever undertaken : shipping more than 2,000 Spanish refugees, who had been housed by the French in squalid camps, to Chile on an old cargo ship, the Winnipeg.

After the official end of the war, guerrilla war was waged on an irregular basis, well into the 1950s, being gradually reduced by the scant support from an exhausted population and military defeats. In 1944, a group of republican veterans, who also fought in the French resistance against the Nazis, invaded the Val dAran in northwest Catalonia, but they were defeated after 10 days.

This webpage was updated 6th January 2020